New Zealand is a fun country that you can go around in and you can actually do both islands if you want. I think the question though is what you want to be in for. The North Island is a lot shorter drives and there are a few more cultural things (also the food I think is better) but the South Island has the more extreme environments and nature that New Zealand would be known for.

The southern hemisphere is flipped so their summer is in December. As someone who traveled during a peak time but also someone who traveled during a shoulder season, I would say the shoulder season is a lot easier to travel in and less crowds and challenges getting things but you can anticipate a lot more rain and dealing with weather. It gets fucking cold, we brought two camper chairs because I thought we would need it and in spring it was so cold on the north island that we almost every night stayed inside and just turned on the heat in the car to warm things up.

The summer though is PACKED, like its hard to even find a place to stay packed.

Another thing to watch out for is that the New Zealand school holiday system isn’t one big summer break, it’s a series of smaller weeks off so if you want to do kid friendly activities or have a bigger group you might want to check those holidays.

Traveling through NZ is easy, almost every place we went took a credit card and it was easy to use it. You can even just use your phone and not a real credit card as Mel had to do that for most of the trip. After covid, it seems that a lot of the campsite booking and other stuff has moved online too. The self pay stations are closed and you need to reserve ahead on the site so you wont even need it for dispersed camping.

The only times you might need cash and other things is to pay for food in major cities or as a backup in more rural regions. We only had to get money out of the ATM twice and both were Asian restaurants in Auckland itself.

Getting around is pretty easy, I would say there is about three ways to get around. One thing you should note that manual transmissions are very common so getting an automatic transmission is a premium.

Car and hotels is by the easiest to get around but you need to be able to plan your schedule in advance. If you like a fixed and a very fixed plan that you know really well this could work. It’s expensive as fuck though, hotels and even cheap lodgings are super super expensive in New Zealand and we stayed near some sites and the camper van was a lot cheaper.

The downside of the camper van is that it’s living in a god damn camper van. There’s never 100% privacy and you end up staying in parking lots and other places. There are lots of camper van rental companies and I’ll talk a little bit about them afterwards. The benefit of the self contained camper van is that it’s pretty easy to clean up and manage things yourself. You get boiling water so you can get coffee in the morning and something warm but you’re stuck dealing with the weather all night.

The RV is the nicest place to stay and you can get a more dedicated space. It’s nice to have the bigger vehicle but then you are driving a much larger vehicle around. It’s kind of scary and also lots of them are manual so getting an automatic transmission is going to be harder. The dedicated space though is nice and honestly not powered vs powered sites don’t really cost that much difference at most campsites we went on the North Island at least. 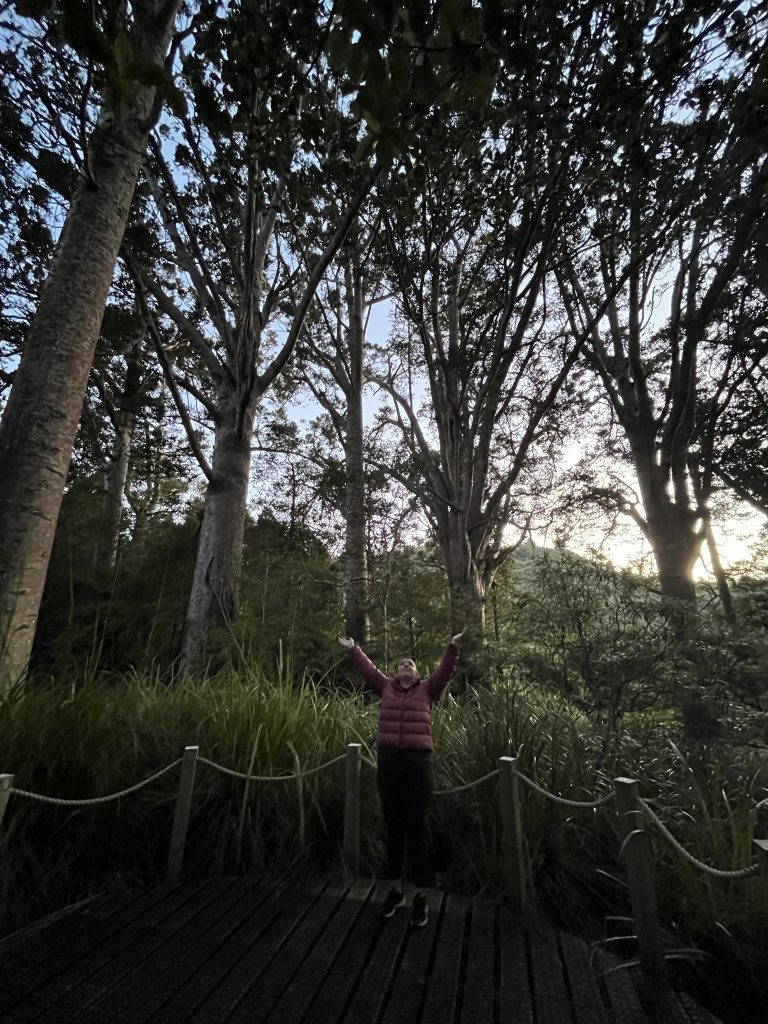 I don’t think there’s that much to do in Auckland but it’s a nice city to get a meal and just hang out. We did date Weta Studios Tour and it was kind of fun but mostly just for something to do rather than actually seeking it out.

Around Auckland though is really nice, I would says the parks nearby are actually really nice. We ended up at Piha Beach and going to Waitakere park and it was actually some pleasant hikes and some chill vibes. If you’re in a self contained vehicle, you can stay at the visitor center parking lot overnight though I recommend over a weekend you’ll probably hear some rowdy people. If you want to go further north there’s more of the same and you can see larger Kauri tree groves. The only downside is that the Kauri are dying due to a fungus so most of the trails in the parks are closed. 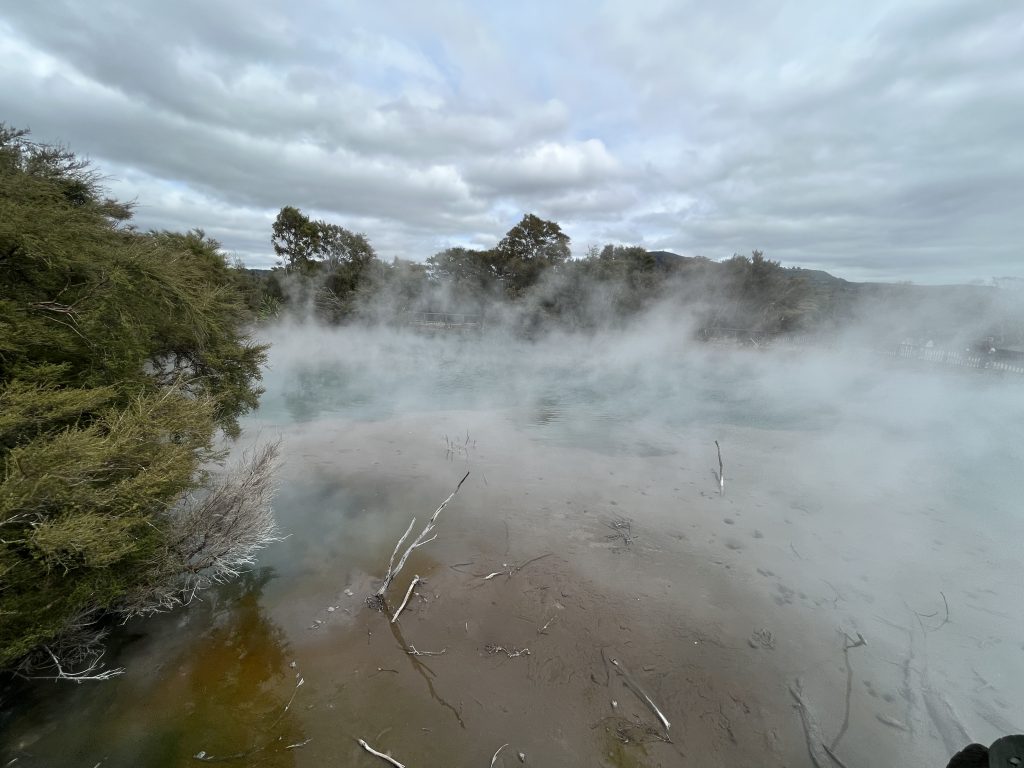 One of the major centers of Māori culture in the island and there is actually some cool Māori shows there. We had one where we just learned some things about the Māori (or at least one tribe of the Māori). The craziest thing was actually that we got a Q&A session with them at the end which was kind of cool to just be able to ask about everything and anything. Outside of that the lake is pretty and there are lots of of adventure things like zip lines and luges that you can go do but we left fairly early. There also some thermal pools in the area.

Also the kiwi museum there is kind of cool if you want to see super baby kiwis. 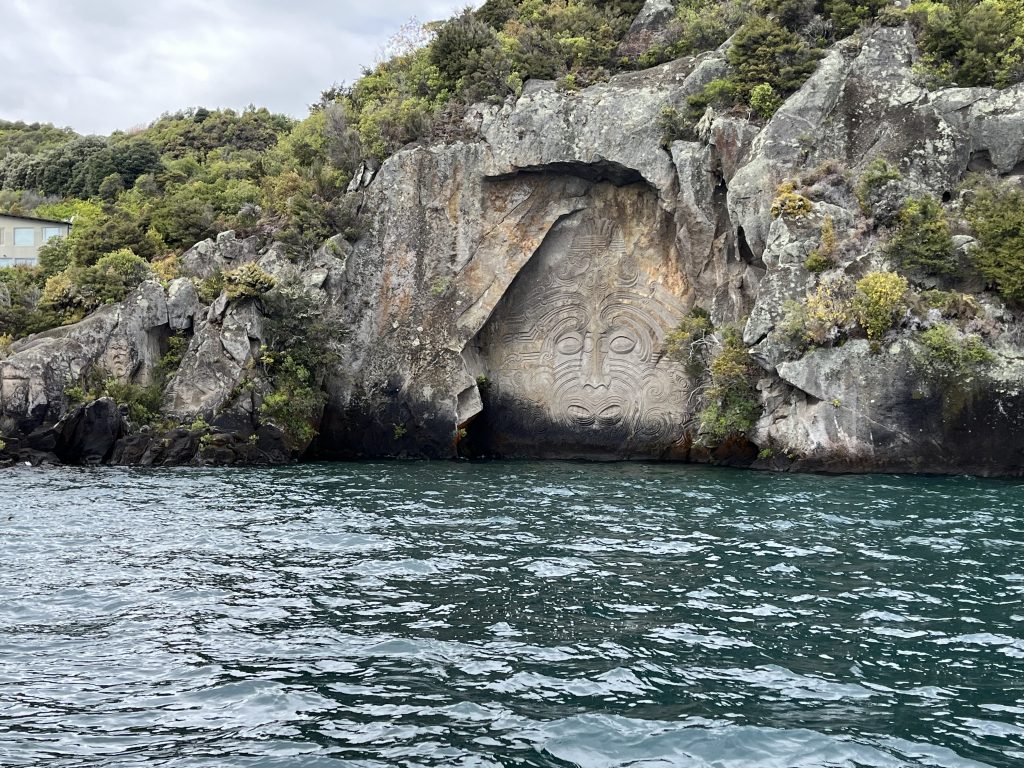 Taupo is a lot prettier than Roturua and the lake is a lot prettier. It has similar action adventure activities though. Less Māori stuff though but apparently a fun fact that is that you can only eat the trout in the lake by fishing it yourself which is kind of cool and fun if you’re into that. We stayed here for a few nights because it was a good base.

We wanted to visit a more out their national park and Te Urewara has been given to the Māori to control. But it was a crapshoot, the bathrooms were closed and there was a mud slide that wasn’t reported on the site that shut down the main road. They’re actually destroying the huts on their great walk so I think they’re aiming to be something else? It wasn’t quite clear but I would only go during a busy season and not a shoulder season like we did. 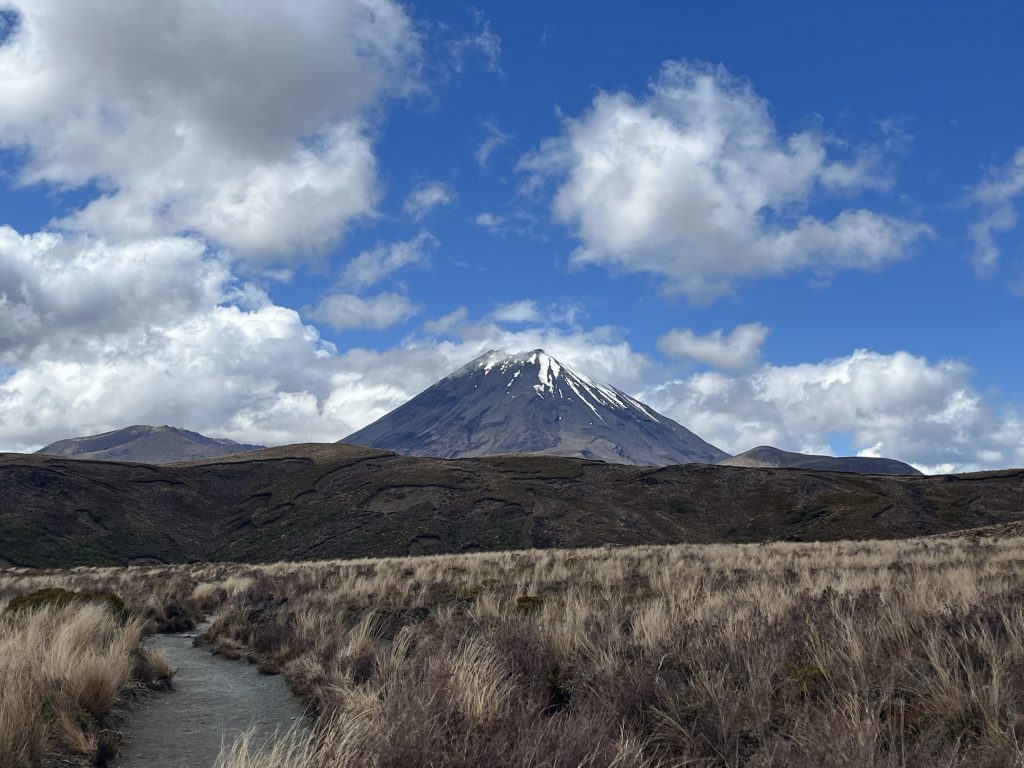 This is the huge mountain near the center of the island and we ended up doing some lovely hikes near it. There is even a pretty hard core one day alpine hike that you can actually go near the top of the mountains in the area and through a pass to get to the other side. I have no idea how you’re supposed to get back to your car but it seems that doing a big loop around it would be pretty cool. If you’re doing campervan and tent life you can do the campsites at the major road or stay in a few small resort towns in the area. The town of National Park and another one in in the area are big ski resort town as there are some resorts up on mount Ruharu 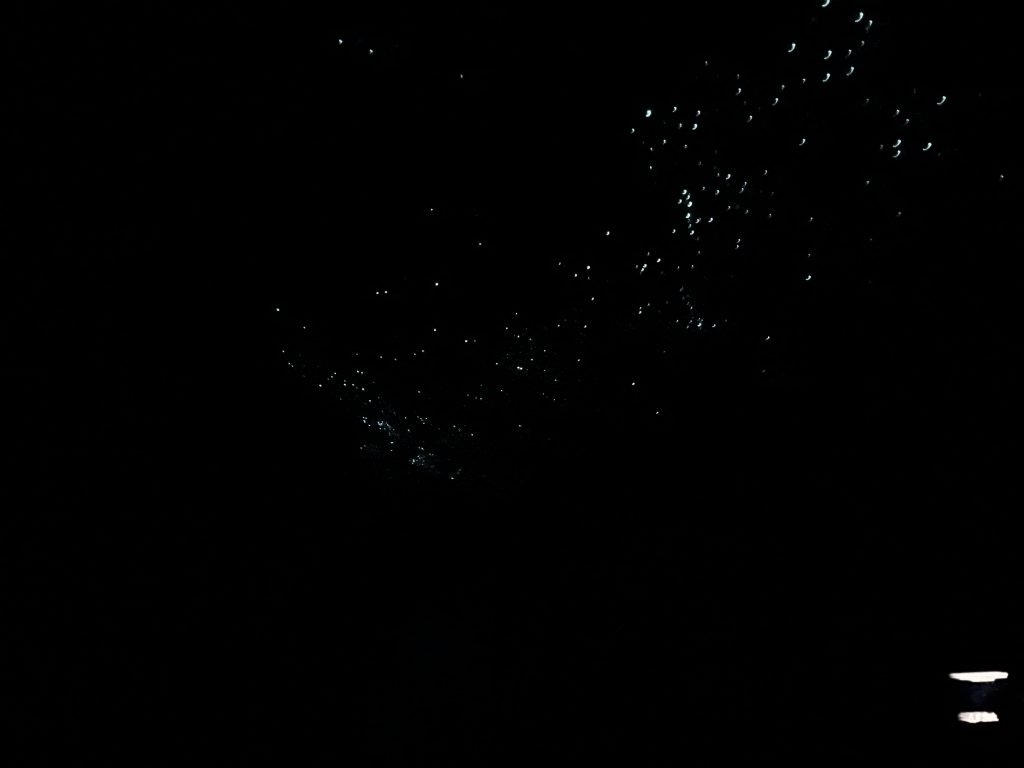 There’s a huge series of glow worm caves in the Waikaito region of New Zealand. It’s pretty nice and I highly recommend choosing a smaller venue since the major cave doesn’t allow you to take photos. Spellbound is a nice travel agent that goes through some private caves. There is also some black water caving experiences where you go through caves and get to see glow worms more personally if you feel like crawling through some caves. I would have totally done it if wasn’t so cold.

There is no easy way to go through all of the South Island in a reasonable time. It’s very long and curvy drives throughout the country and prepare for long times in between spots. I would highly recommend creating a smaller circuit that lets you take a loop OR if you can I would see about getting a campervan pick up in one spot Christchurch and drop off in Queenstown. You might get a discount for that kind of travel or it might be more expensive, we ended up having to do a return trip. 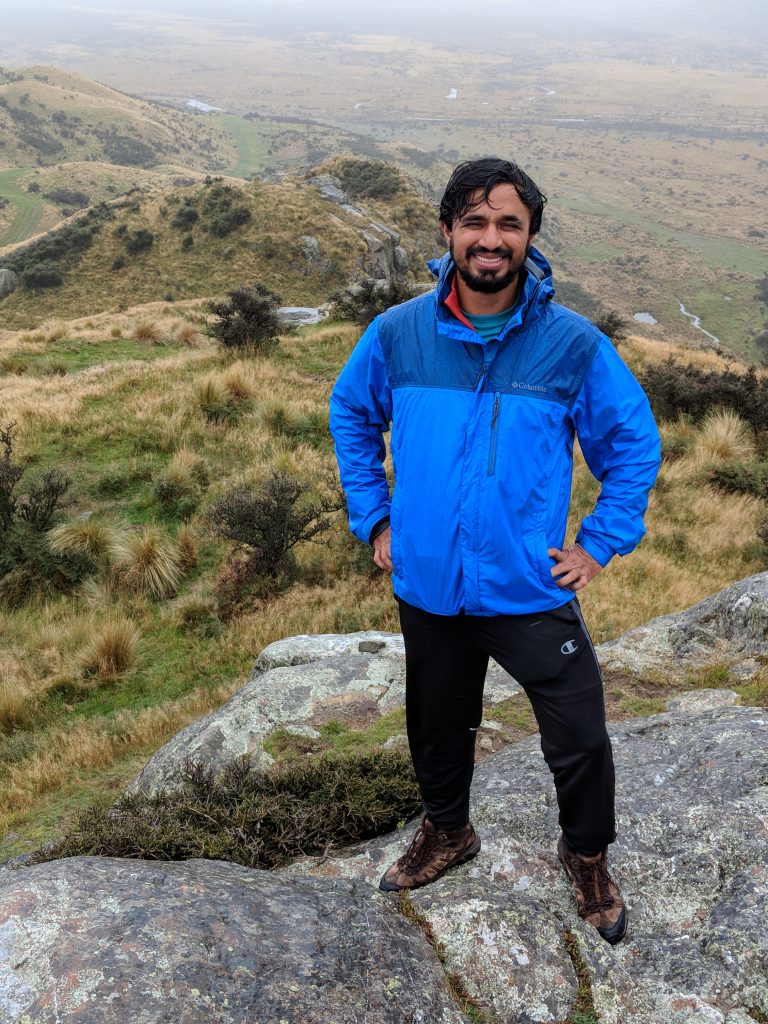 If you’re going to take the long route to Mt Cook you might want to stop at Mount Sunday. It’s where they filmed the Edoras scenes in Lord of the Rings so I went because it was necessary for me to visit the Land of Rohan. 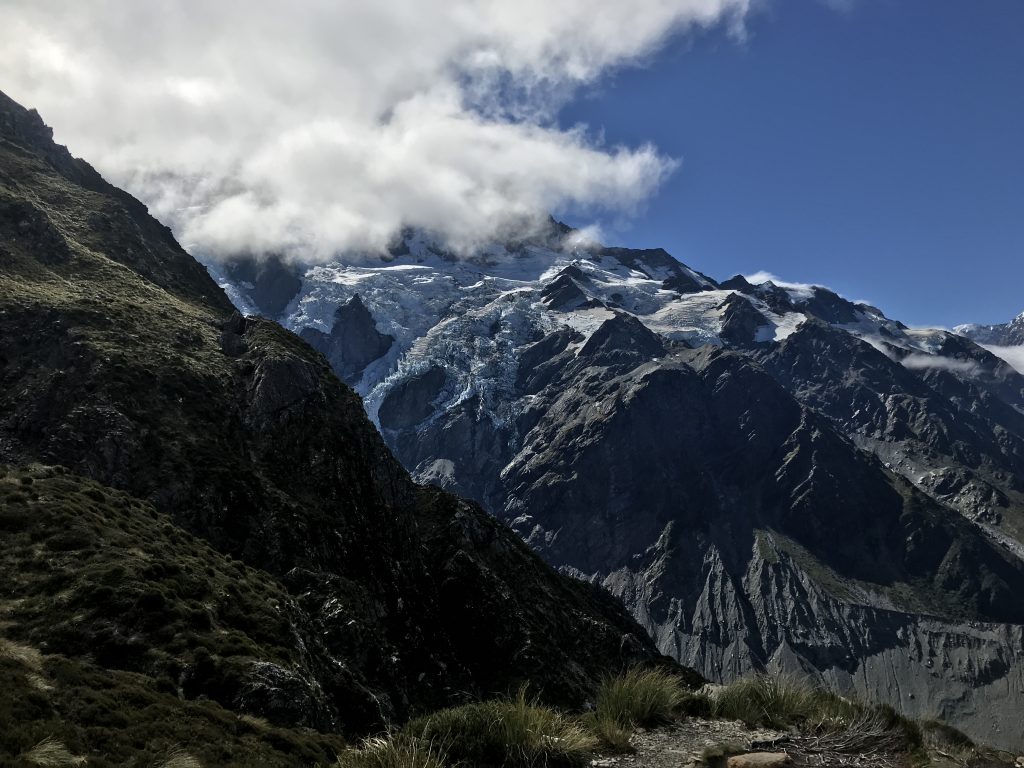 Mount Cook is beautiful. You can go climb the hills in the area and just see the beautiful mountains / glaciers in the area. If you feel like doing it, there’s a very popular great walk in the area. The Great Walks in the area are a lot easier than backpacking in the United States as you go between huts so you don’t have to bring a tent or other things to protect yourself from the weather. There were lots of people who were just doing the 1st stop of the trip.

Lake Wanaka is a beautiful little spot between Mt Cook and Queenstown. Outside of that there isn’t a lot to see here though there is a famous tree in the lake. Roy’s Peak is a pretty intense climb that my friends did that I didn’t.

Milford Sound is this huge fjord that was carved out a long time ago. The fjord is amazing and most of the time it’s pouring rain and you can see the dozens of waterfalls in the area. I would highly recommend going kayaking in the area and you can stay outside of the area. The downside of going here is that it’s out and back, you can’t make a loop with other parts of the South Island.

Queenstown is the base in the west toward Mt Cook and Milford Sound. If you have a limited amount of time in the South Island I would fly out here and start your journey here instead. It’s a nice little spot and you have lots of adventure things like bungie jumping, canyoneering and skydiving. It’s pretty great and I highly recommend going to Pedro’s Lamb. It’s the best lamb shoulder I’ve ever had and their entire menu is just one item which is always a good sign for me.