If you haven’t heard already I moved to Oakland with my girlfriend Mel. This is a super exciting time in my life but I wanted to write about my past home. I lived at the intersection of 26th and Fair Oaks for almost 10 years. It’s not the first place I moved to SF but the 2nd! I moved to SF, then moved to East Palo Alto, and then moved back to SF for a startup that I participated in. I was about to move into my office when I found my place I was actually measuring the spare room to check to see if I could fit the bed. It was a great studio apartment and I asked the landlord on craigslist instead of the open house on Saturday if I could come up that day. I signed up and got the place right away.

This home is where I grew to love the Bay Area. It’s where I became who I am today. It’s where I made great friends. It’s where I collapsed in my bed and slept for 24 hours after a week of not sleeping at Burning Man. It’s where I was on a reality show. And I will miss it. It was a great studio apartment.

When I first moved to the city, I really wanted to lose weight so I walked and listened to books. I walked hundreds of miles and I knew each step in my neighborhood. I knew that grid in and out. So this is a post that just goes over some of my favorite little places and my favorite little tidbits of the neighborhood I used to live in.

It’s closed now but this was my go to coffee shop. I don’t drink coffee but they had an amazing hot chocolate. Anytime I needed to work from home and didn’t want to be in my own home I went here. I’m sad they’re shut down though they do have a downtown Oakland location. 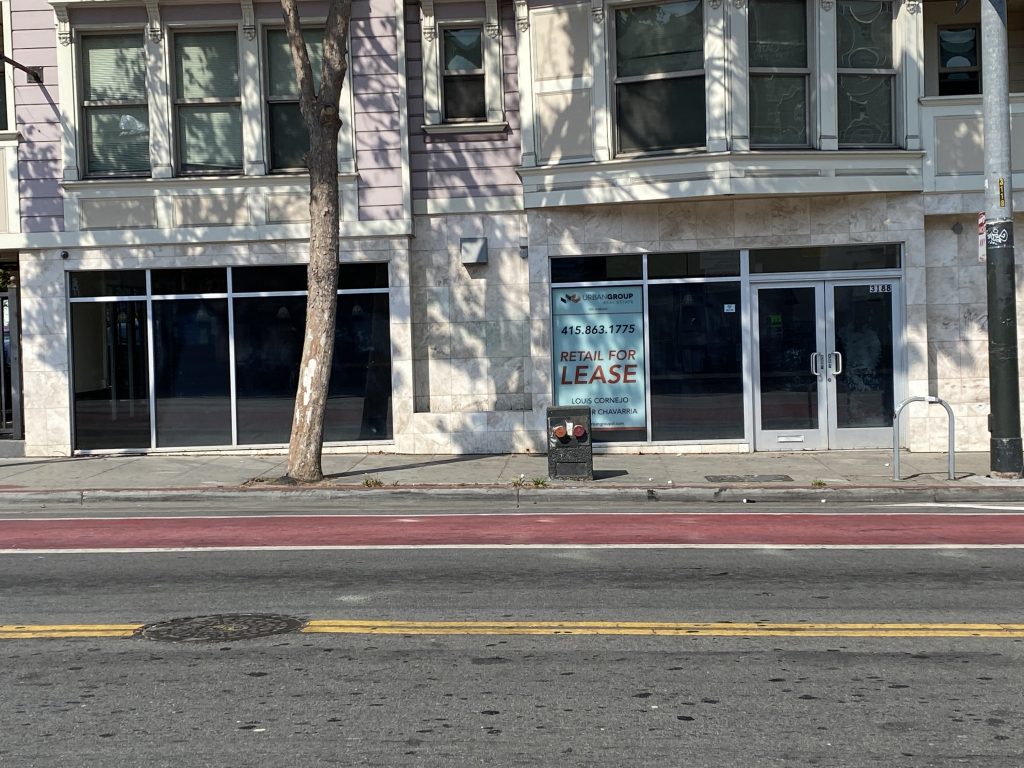 This was my dog park. I knew the people in it, I met my neighbors, I knew the neighborhoods dogs. It was super nice. The community kept their dogs in check when things got too much and nobody got too fussy about when things got out of control. Once in a while somebody would bring and put 30 tennis balls there for community use. I did it once or twice too and they would last for a few months until they were either destroyed or taken away. 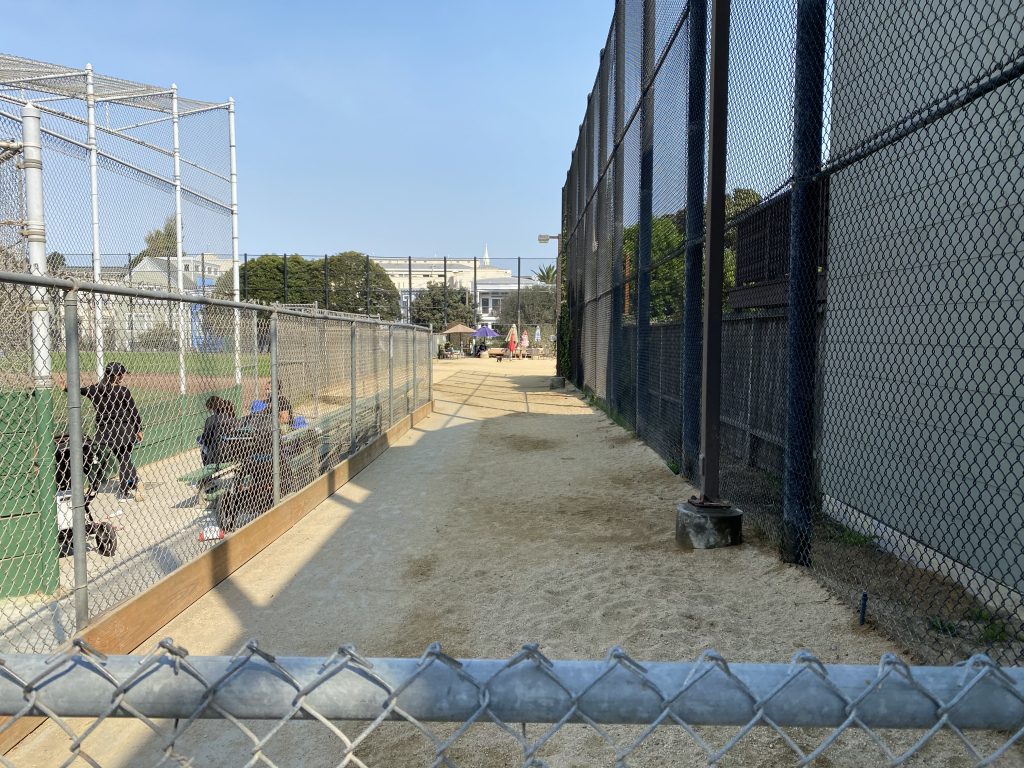 You ever been on Church Street? It’s the route for the J Muni Line. Well here’s the church that I like to say Church Street is named after. I have no idea if that’s true but it’s a beautiful church. It’s also probably a legacy of Noe Valley’s Irish legacy too. The dock workers moved to Noe Valley and out of the Mission/Potrero areas when traffic started moving to the Port of Oakland. 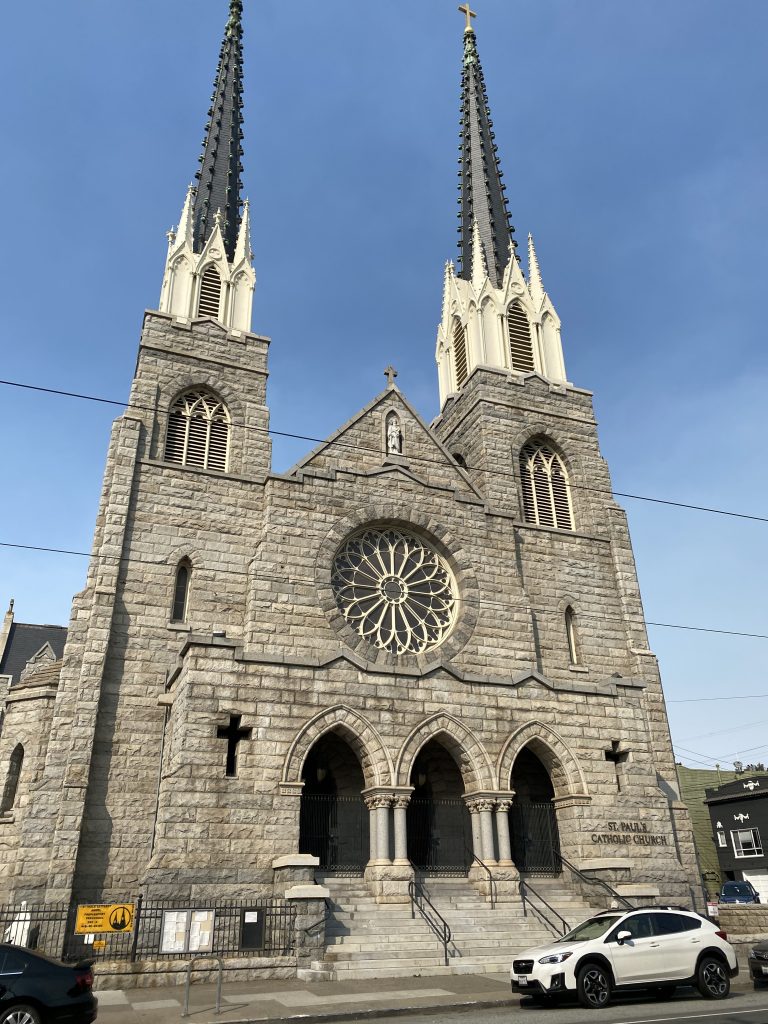 Mitchell’s is my favorite ice cream place in all in San Francisco. It’s got a delicious assortment of flavors and it’s a SF institution. It’s been there for more than half a century. It was my go to date spot since it was delicious, close to BART and close to my house so I can easily get home. It was also my favorite date spot because I could easily go into a walk around the neighborhood with some interesting tidbits about the history of the area or if things didn’t work out it was an easy walk home. 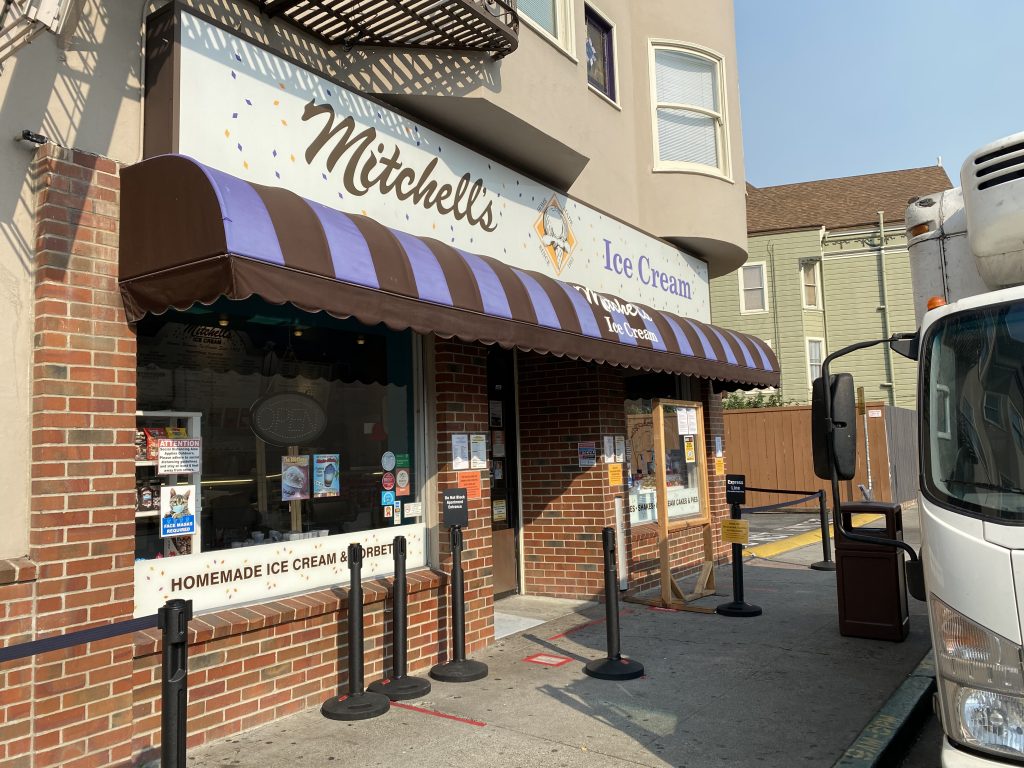 I had three bars in my rotation when I was in my neighborhood and the Royal Cuckoo is by far the zaniest one. It’s interior is a red tinted dive with odd arrangements of seats and a mounted deer on the wall. Occasionally you would hear a tiny live show on the organ inside. 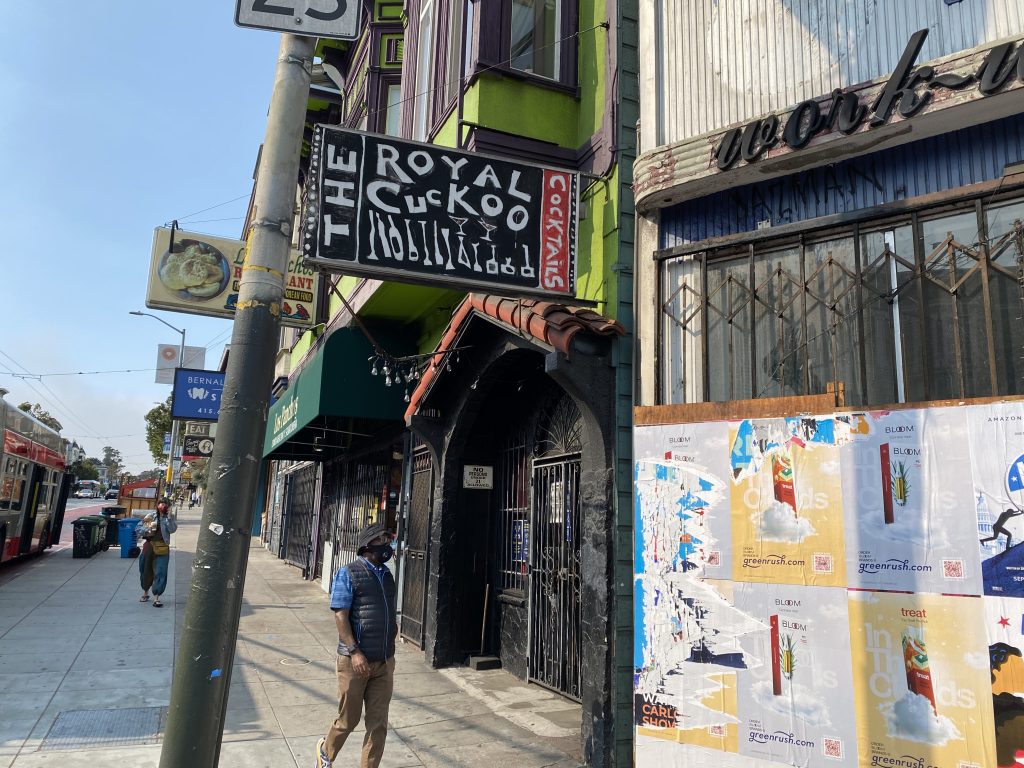 The 2nd of my rotation bars. PI Bar does two things well: Pizza and beer. The rotating tap was always wonderful and the pizza was a perfect thin slice of pizza. When I was much younger I would just come here, grab a beer and read a book and talk to some people occasionally. Everyone was chill and it was a nice place though I eventually stopped drinking beer as much as and only went occasionally. 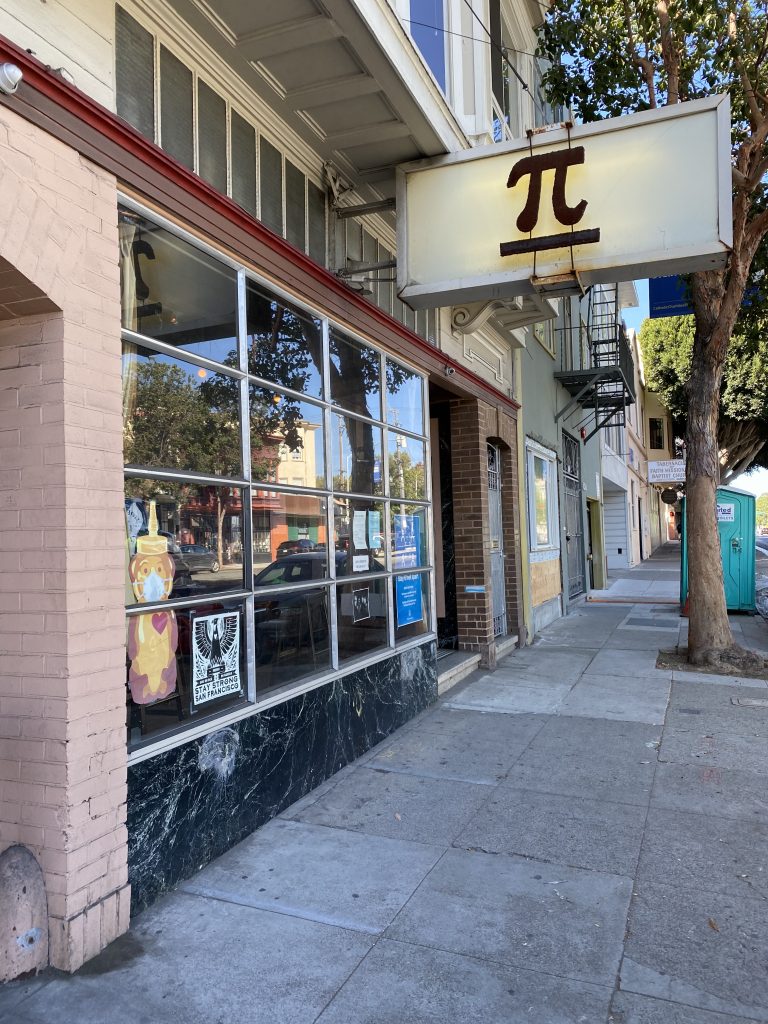 The entire building was torn down due to not being seismically safe but the city didn’t want to lose a hospital that could serve the southern part of the city. So they paid Sutter to build a new hospital next door so you can see the new place. This was my landmark. If I wanted to find my house I could always look out for this place. It was far taller than any other building around it so it was nice to have a view of it. 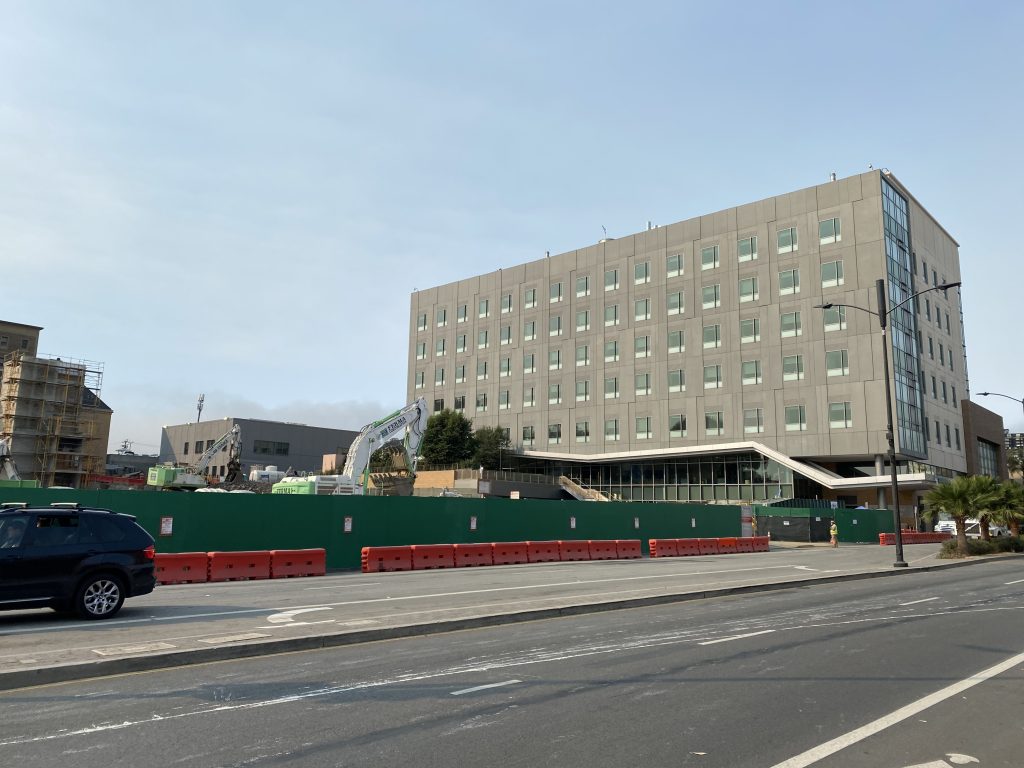 Arizmendi does a delicious cheese roll. It’s right on the corner of 24th and Valencia so it was on my bike route home and to work. So in the mornings I would easily stop on the way to work, grab a roll and then take bites anytime I ran into a stop light. It was too early for their pizza and the most annoying thing about them was that half the time the cheese roll was burned. I loved supporting a co-op owned bakery but I wish they got their shit together and were more consistent. 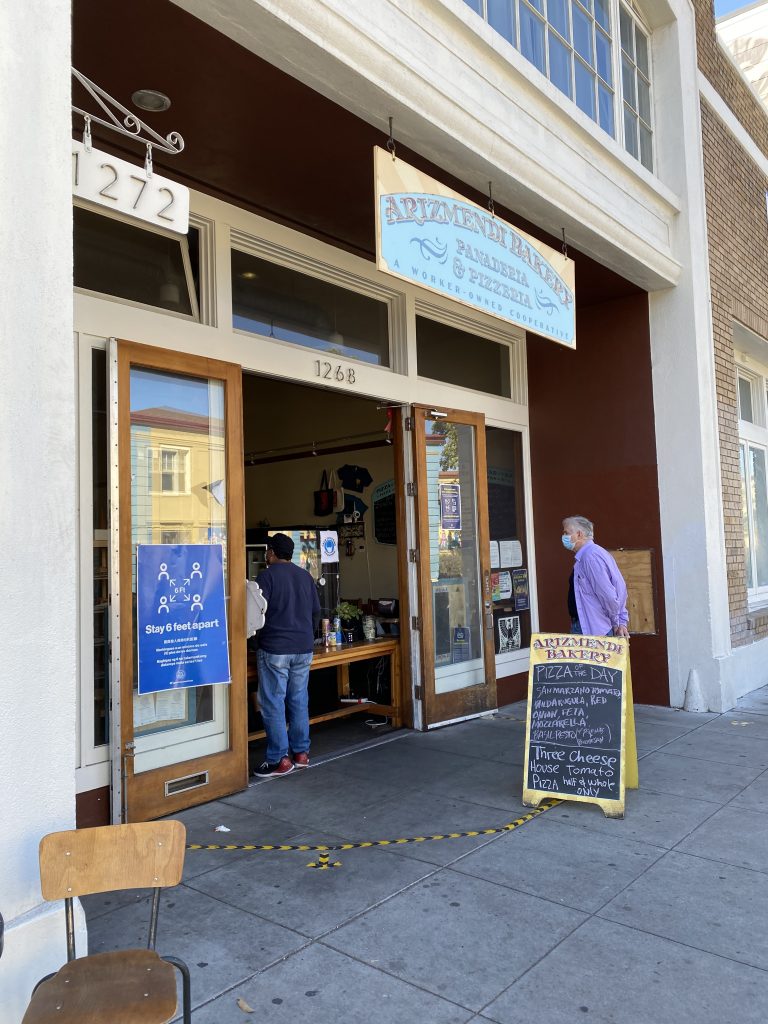 Phat Philly was one of my favorite places in the area. They’re a delicious little cheesesteak place but the real thing they have is the cream filled churros. They’ll make it for you fresh and it’s delicious. The churro carts in the area are fine but Phat Philly had the BEST churro. Early on I ended up going on a single date with the girl who worked the counter (one of the few times and only times I’ve ever asked out somebody who was working) and after an unsuccessful date didn’t go back for a few months because it felt awkward. So I just learned not to ask anyone else out while they’re at a job and especially not at the places I loved going to. 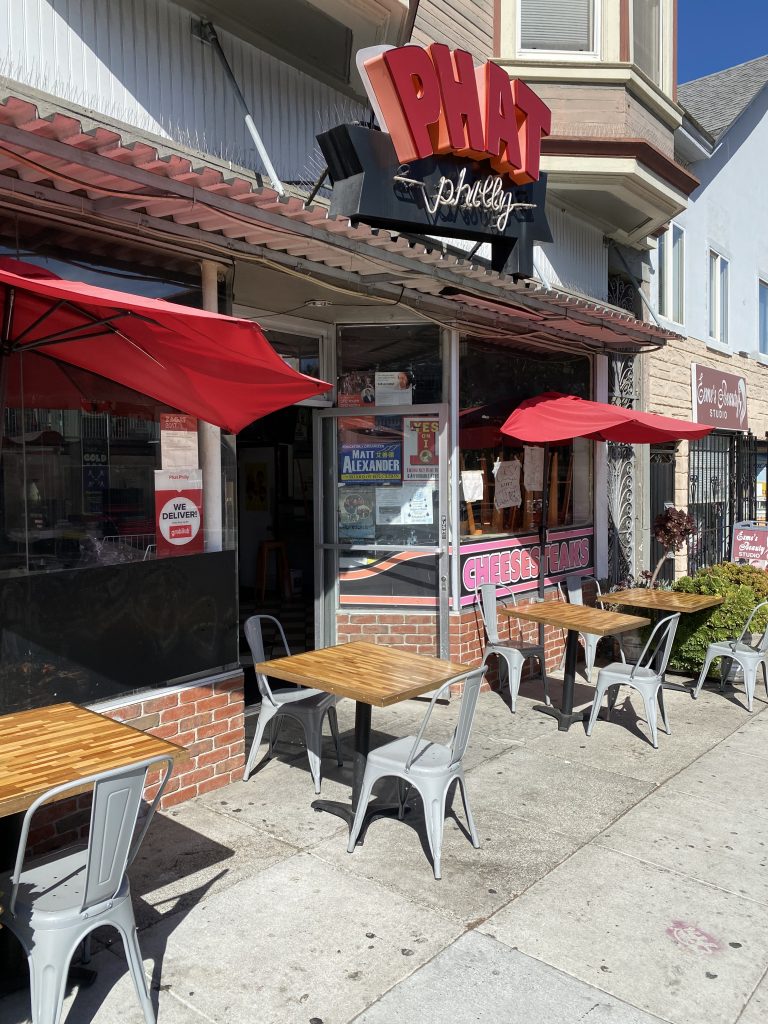 This place is good but I honestly didn’t go into it too much. The thing that made me remember it though was that each morning as I went to work I would bike past it and they would be baking cookies. It was delicious but god damn’t I was always tempted. Thankfully they weren’t open that early so I usually passed by. 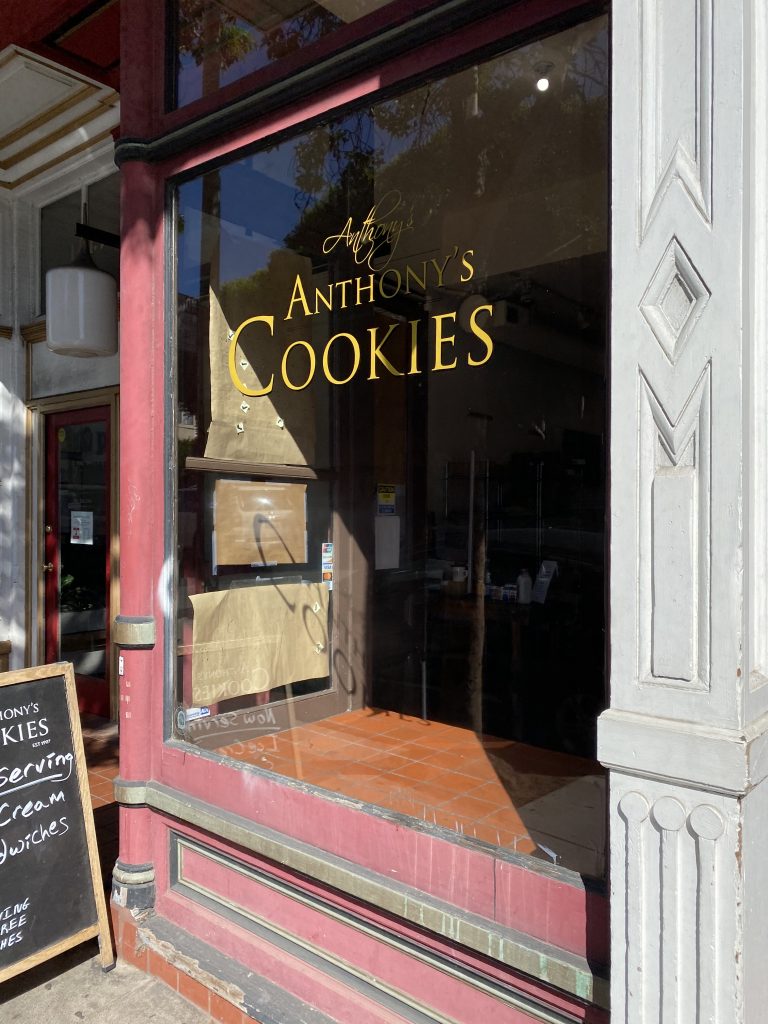 When I first moved to the Mission there was one Indian grocery store on 16th street but it quickly shut down. Unfortunately the other closest one was in the TL so Samiramis was a great little find. The intersection of Indian and Middle Eastern was pretty high and I could get all the spices I needed. In later years though a few Indian grocery stores opened up in the area so I didn’t shop as much here. But if you ever want some Halloumi you have your place. 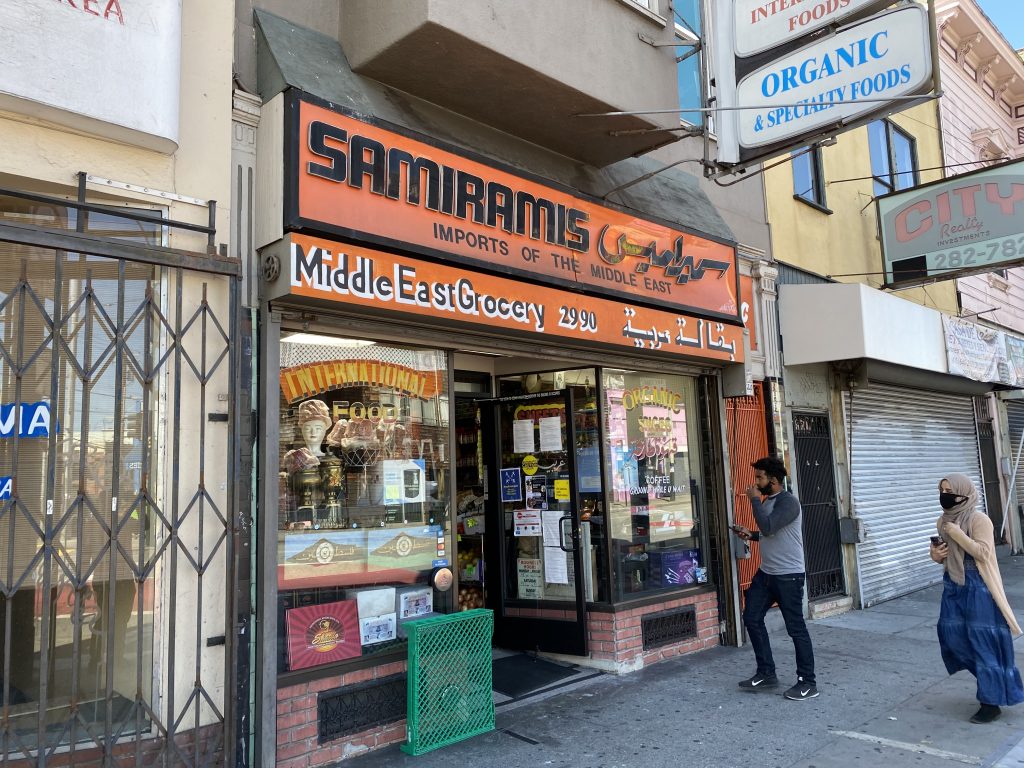 It wasn’t the best Chinese food but it was the closest. The family that owned it was kind of chill and knew my name which was kind of chill. They had the best mapo tofu in the city, not too oily and a good flavor profile. 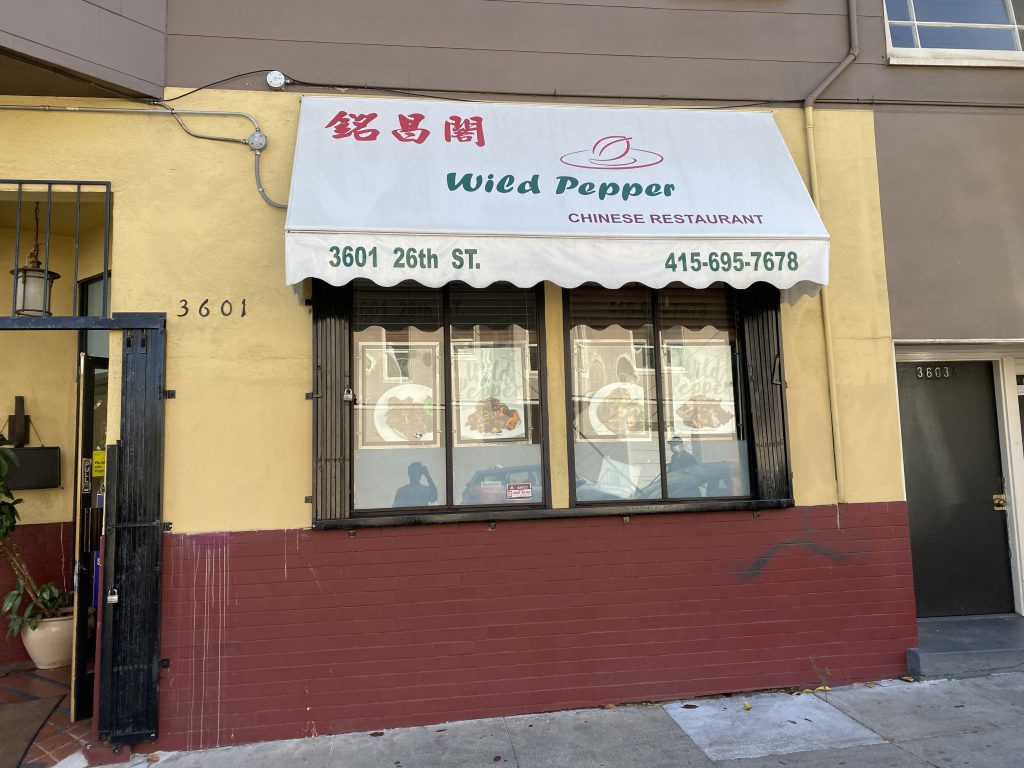 This little park was mine and Ryoga’s park. It’s under construction right now to forever change and for good reason. The entire sidewalk was a mess for anyone handicapped and while it was officially an on leash park nobody really followed that rule. If you saw another dog on leash the rule was to just put your dog on leash but if everybody was fine with it you could just go. Me and Ryoga stopped there every day. He would recognize that we were going there like at least a block or two before and start pulling. 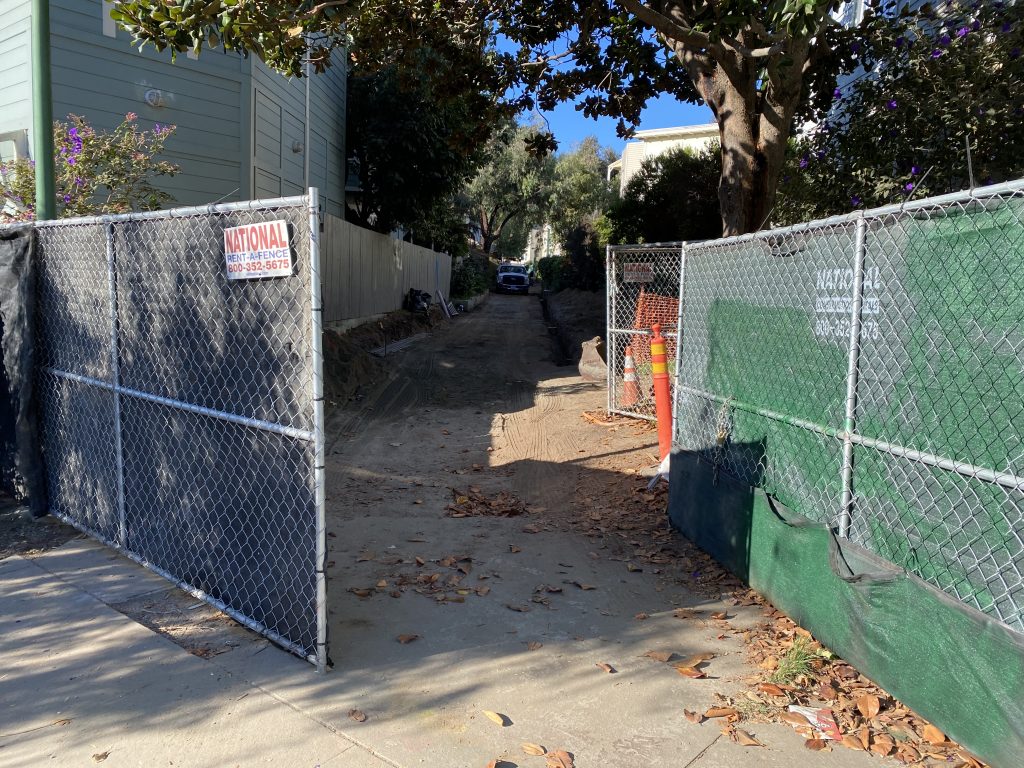 Corner stores are a hallmark of SF and I loved mine. It shifted to new owners over the years but they kept all their staff. You could get some fancy ass shit in my corner store and it was pricey but it wasn’t terrible prices and it was nice to just get produce and some basics whenever I forgot something. Ersi one of the staff there was super nice and loved Ryoga. Normally I wouldn’t bring Ryo into the store but he would be like come inside and he would give him a treat. 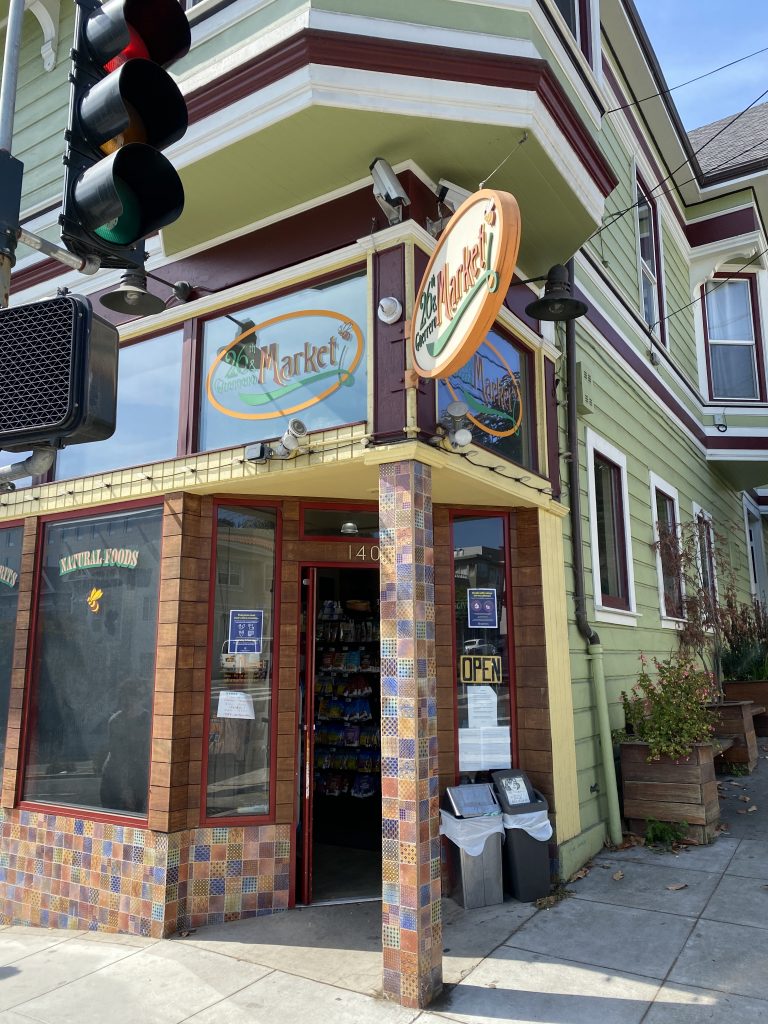 This was my little grocery store. I usually didn’t make it all the way to Safeway down the street especially since this place was on my way home. It was a nice little pit stop and for at least 2 years I would get an avocado for the next morning and eat it with some chili powder and toast. The prices were always super cheap and it’s because their produce went bad much quicker than stuff you get at Safeway. There’s some logistics thing about this but I honestly don’t know enough to talk about it here. 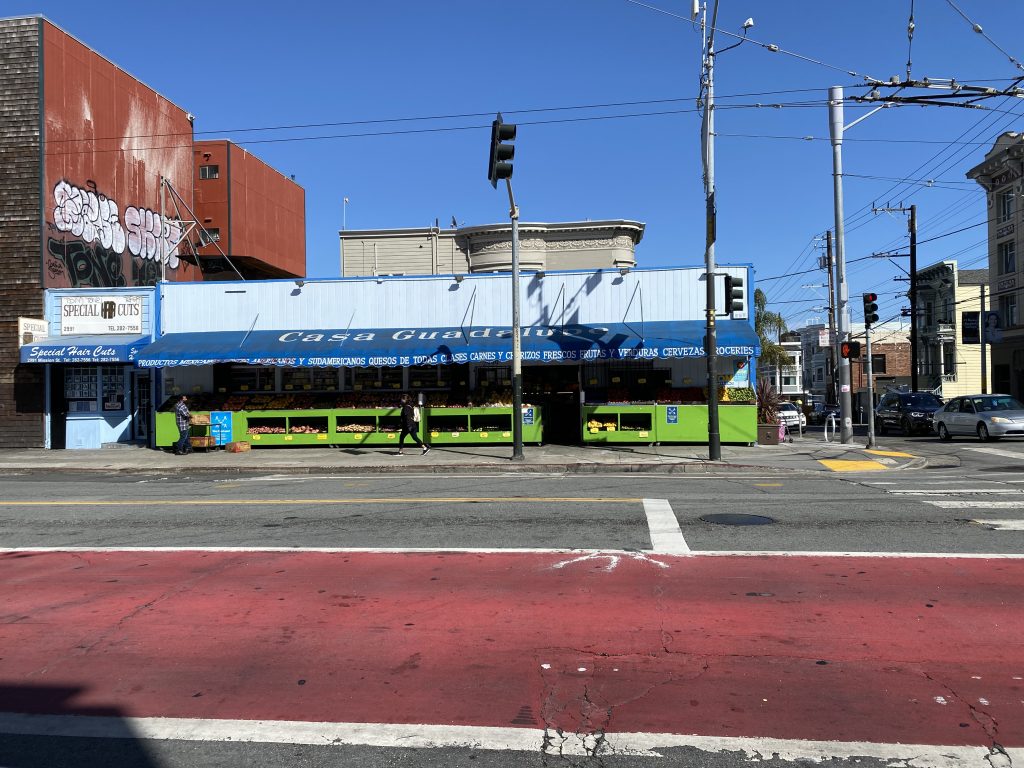 Every Halloween Fair Oaks would get shut down from 26th to 22nd and it would be just for kids to trick or treat. It was adorable and you’d see kids from ALL over the city coming to this block to really enjoy themselves. I generally was doing stuff on Halloween and the last time I did it with Mel we had to actually go across the street and park it there because I was on the other side of the street lol.

I didn’t plant too many trees in my area. Noe Valley is a rich area so it was never a huge focus of FUF especially after the city started buying trees and being responsible for their own street trees. But I planed all these guys as basic trees! Probably 3-4 feet tall each of them and they’re growing now! It’s kind of cool. I’ll come and check on them sometime in the future to see if they’re still there. 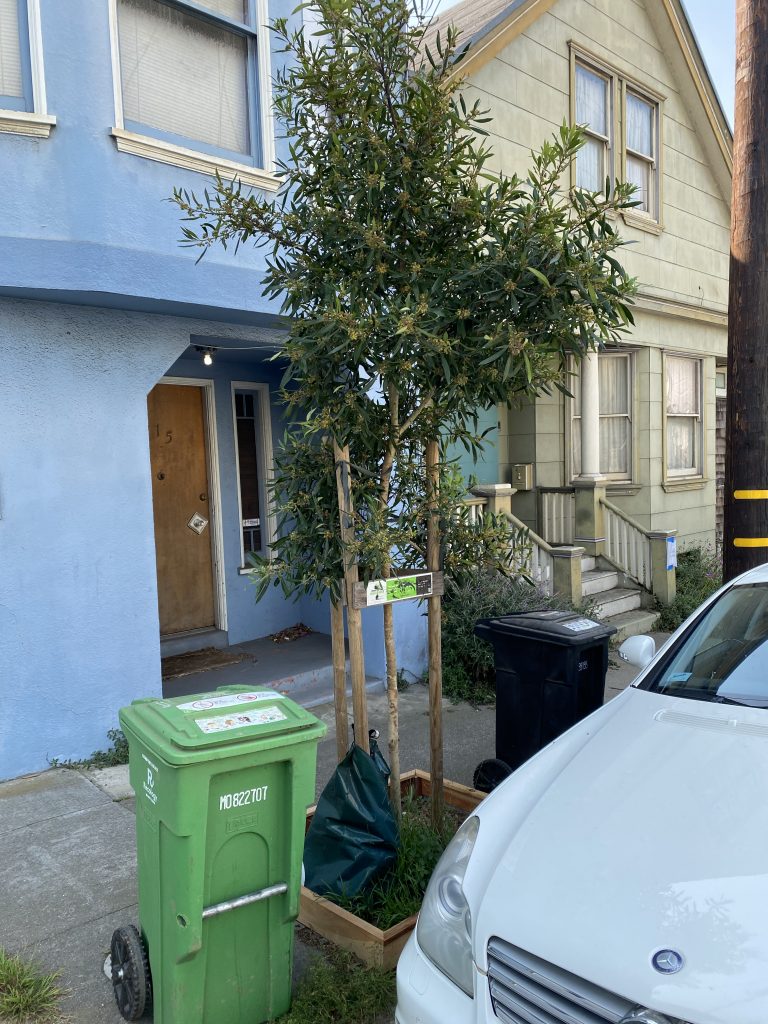 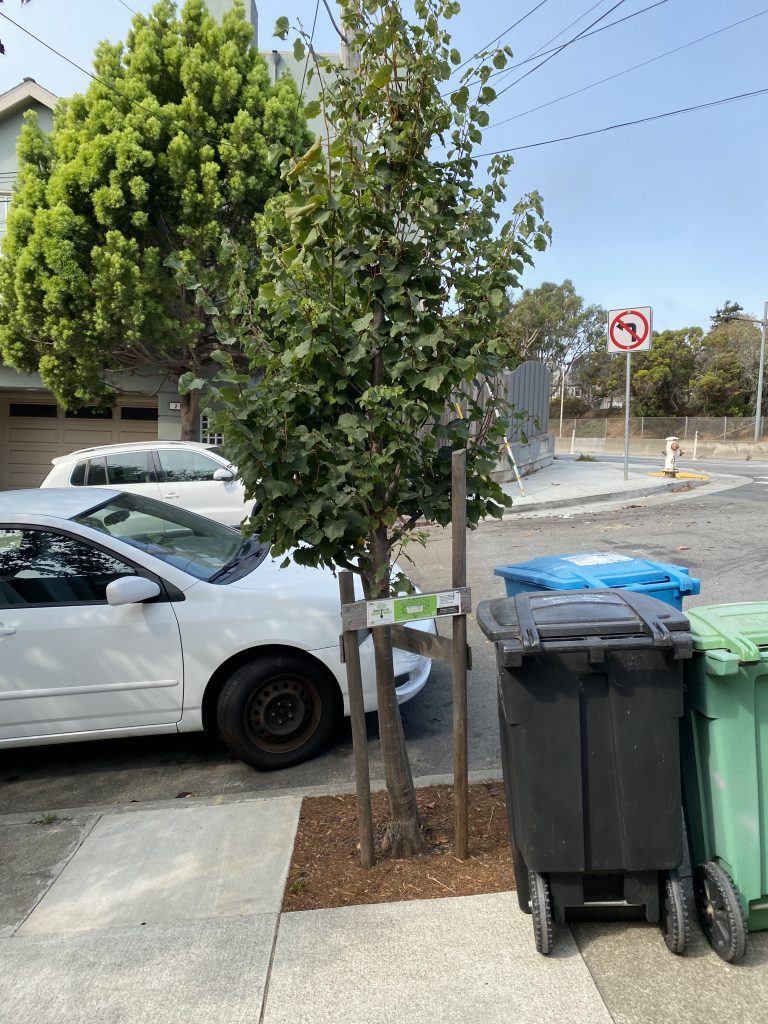 This is one of the largest projects I’ve worked on with FUF. It requires neighbors to usually work together but this one was so huge and on a corner plot that it only required a few people to support. The garden though was real nice and it opened up a huge portion of soil for water to get taken. Since this downhill on Sanchez it was a nice little drain for water too. 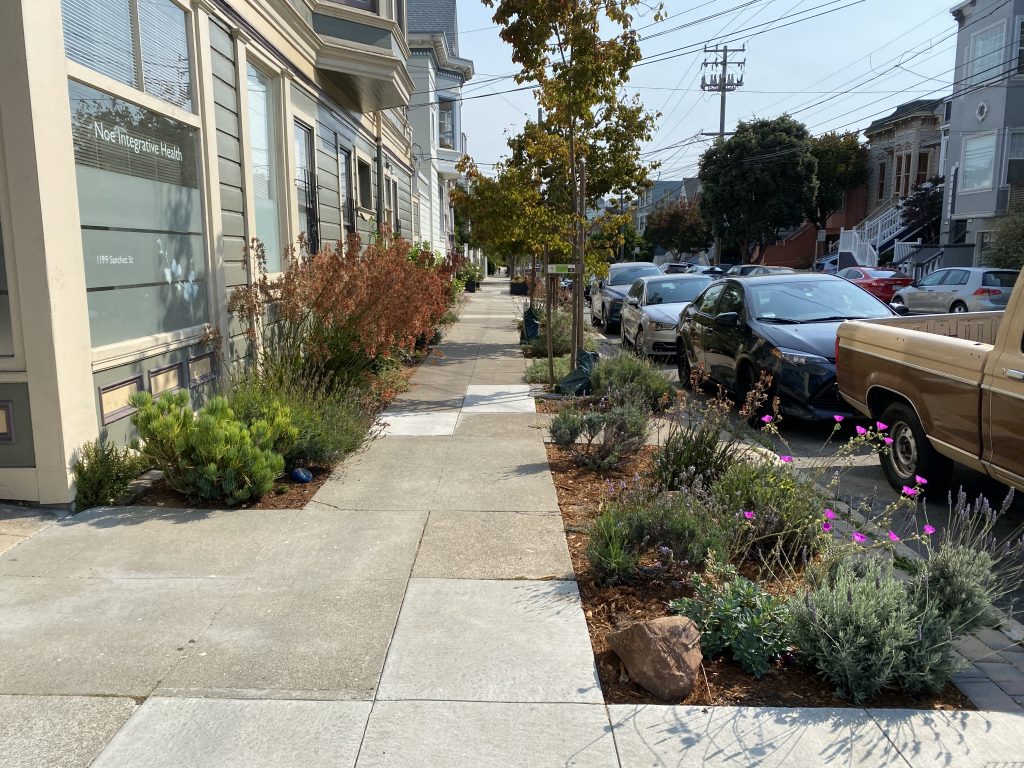 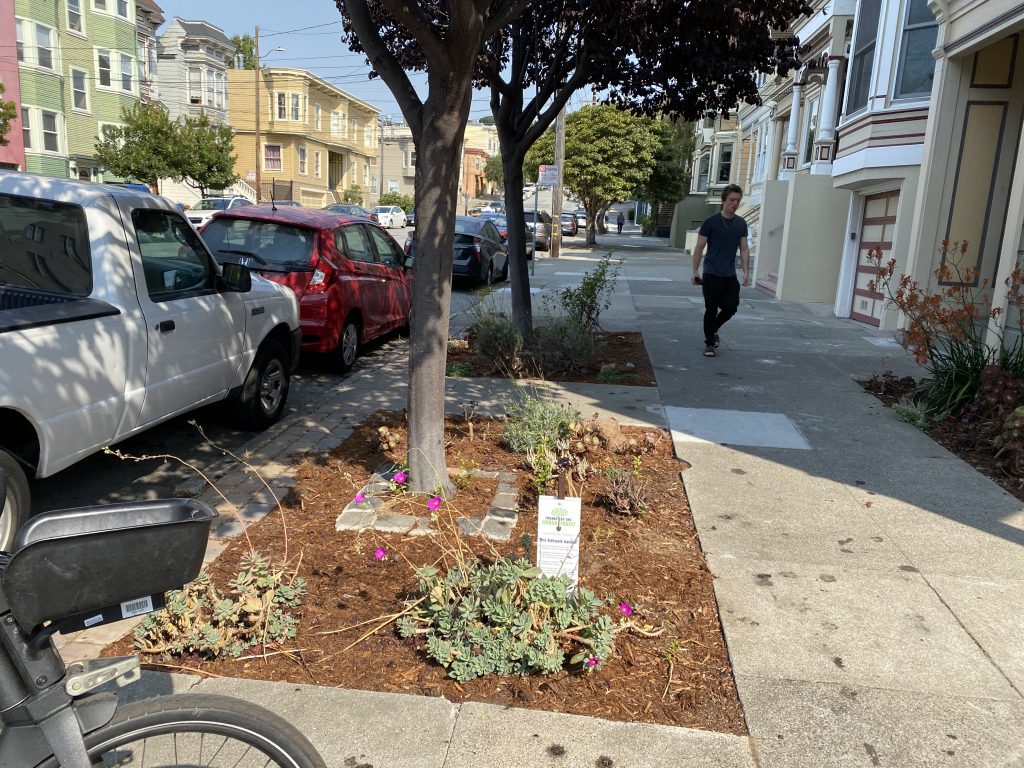 I finished this post almost a month after I’ve moved and there are things that I really miss about my old place. The only corner store we have here is a 76 which isn’t quite the same. There are surprisingly no trash cans here to put your dog poop in and the only neighborhood dog park is technically in Piedmont and has some bullshit off leash license thing. But the area is so much more lush and green than my old neighborhood. There are so many trees and bushes and vines growing here that it’s super nice. The downside is that Ryoga has a penchance for chasing all the wildlife including the turkeys and squirrels in the area.