I went on a recent trip (October-November 2019) to Namibia a beautiful country on the southern side of Africa. Honestly, it wasn’t really on my radar until somebody suggested it as a location to go and it had a a diverse set of awesome activities to do. The country divorced itself from South Africa in the 90s and is this huge mostly empty country. The highlights include safari animals (lions, elephants, etc), delicious sea food and the tallest sand dunes in the world. You could do the entire thing on tour but honestly driving yourself around is also pretty reasonable. The big thing is that you have huge distances between the places but having your own car is pretty comfortable to set your schedule.

Namibia’s dry season is in September/October which makes finding animals a lot easier as many of them are hanging around the watering holes throughout Namibia. The rivers are pretty dry and it’s simple weather to navigate. The rain in Namibia doesn’t just cause issues with animal tracking but I imagine since most of the country is gravel and dirt roads any amount of rain could be a driving hazard. We decided to aim for October mostly because it worked out best timing for all of us.

The really annoying thing about getting there is it’s fucking farrrrrr. Among my group we did 3 paths that worked out. You almost always fly through Joburg in South Africa to the capital Windhoek. It’s also possible to fly through Ethiopia but there’s a lot more flights going to Joburg than the other way around.

The big thing that I was surprised about Namibia is that almost everybody accepts a credit card. Even the far out national parks accept cards (though it’s mostly visa/mastercard). It’s even encouraged because I imagine people steal cash out there. Check your card to make sure you aren’t charged a foreign transaction fee and only withdraw maybe like $2000 Namibian Dollars from an ATM. The biggest cash transactions for our trip were less permits and items but actually hotels that only accepted cash. There was quite a few of those and it required withdrawals to get those, but every restaurant and place accepted credit cards.

The other thing we learned is that ATMs might give you South African Rand. The Namibian dollar is pegged to the rand and we never had trouble getting anybody to accept either one. US Dollars were also sometimes accepted but not always.

Renting a car or a tour?

I looked at the costs of the tours and honestly it’s okay prices compared to the cost of a renting a full equipped SUV and the cost of hotels. The other perk of tours is you don’t have to worry about cooking or groceries or eating out at really bad restaurants. As someone who hates driving, it would have also avoided the 5+ hour drives between the major regions.

The downsides of the tour are if you have very little control over how long you spend in each place, this matters a lot with exploring Etosha (the animal safari national park). It also helps to get up super early and skip the lines which many tours might not do.

The rough part of a rental is you should 100% NOT get a regular car. The roads are painful throughout Namibia and honestly having a rental car with a high clearance and 4×4 is your best bet. It’s easy to get a flat or a cracked windshield driving behind somebody. Windhoek has lots of places that will charge you ridiculously large prices ($100/day minimum) to get these behemoths of modified Toyota Hiluxes. They’ll come with a back compartment and some useful amenities like a shovel, an axe, wood blocks, jacks, and an air pressure fill up mechanism. We never needed most of these things but we also never got stuck, if we did it’d be pretty painful without it. The other fun benefit of these vehicles is they are equipped with secondary full tanks so you can go 1000+ km without a fill up which sometimes you encounter with gas stations.

If you’re doing a self-drive, 100% get a fucking data plan just in case you need to call somebody. You aren’t guaranteed to have reception but it’s better than nothing.

The Namibian diet is french fries, sausages and other meat. The coast has delicious delicious fish though. I had some of the best calamari there and some delicious meat pies. But overall, Namibian food is okay. Trying to go vegetarian would be hard.

We brought backpacker meals a lot to supplement those days when we couldn’t get food or a restaurant. This was clutch in Etosha and Sessiriem areas as the restaurants are out there are really bad or just very expensive for their cost.

The only places you can get groceries is Windhoek and the coast cities. Otherwise you’re getting liquor store groceries and long shelf life food in other part of the country. Some of these tiny grocery stores are also closed on Sunday which was a nice surprise when we fucked that up. 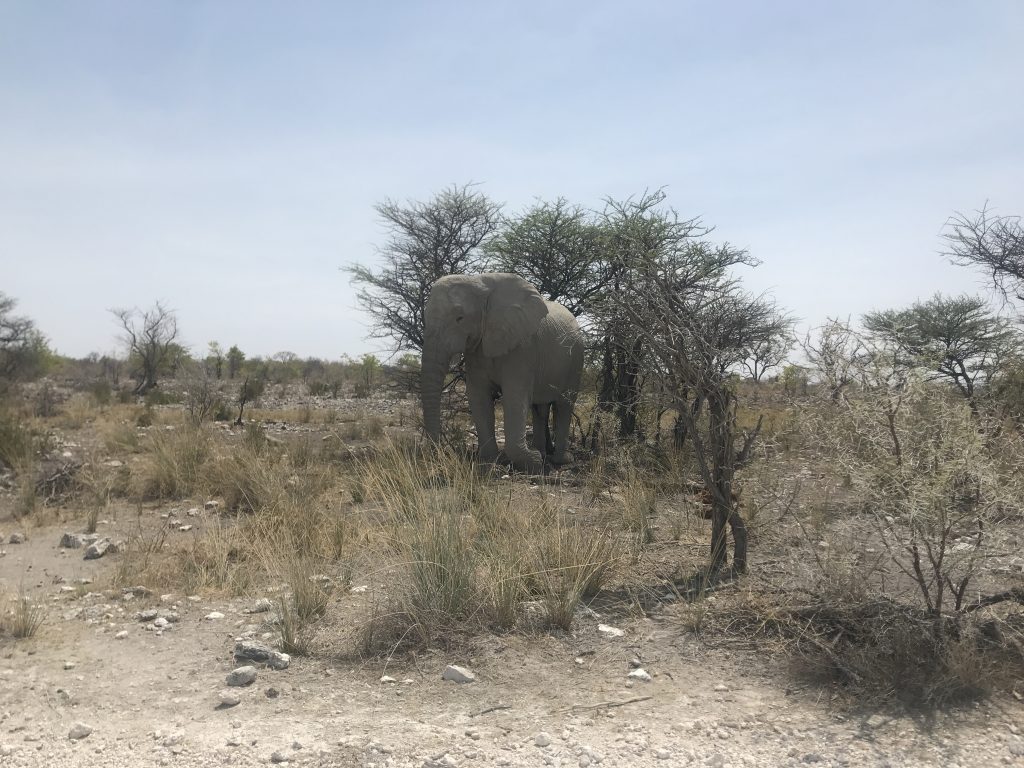 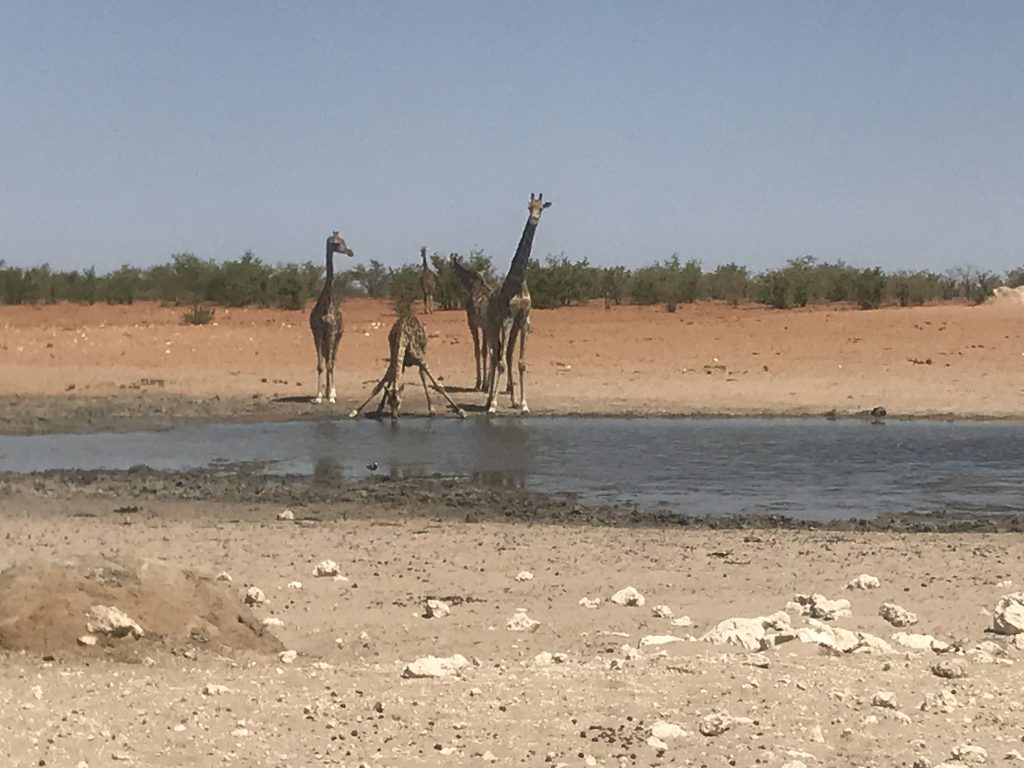 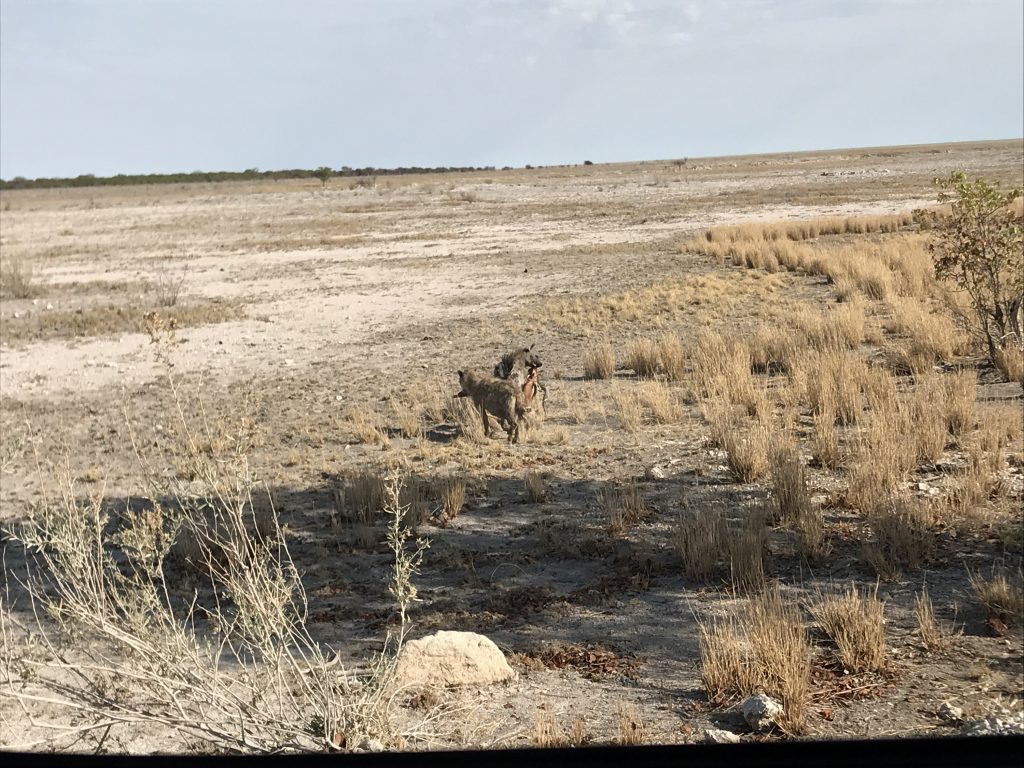 I would highly recommend staying IN the park, it’s expensive but Halali camp is a pretty nice campground. It’s got power, a pool, and some other nice amenities that you wouldn’t expect from a national park. But it does let you avoid having to drive an hour to go through a gate and you can just get going. Most animals are out early in the morning so it’s important to spend the extra cash to save those 2+ hours. The other small perk about Halali camp and Okaukuejo is they have flood lights at night around their watering hole so you can see some night creatures.

The restaurant is a piece of shit buffet though for $30 at Halali. So I would bring your own camping food. Or prepare groceries from Windhoek. We did get to try impala though which was a nice thing to try but honestly get that kind of stuff in Windhoek.

The night Safari is expensive but not bad. Kind of pricey but we got to see some cute foxes and accidentally fucked up an aardwolf’s hunt of some sleepy gazelles. Oops.

Prepare to stay in the car all day, you’re not allowed outside the car for obvious reasons. 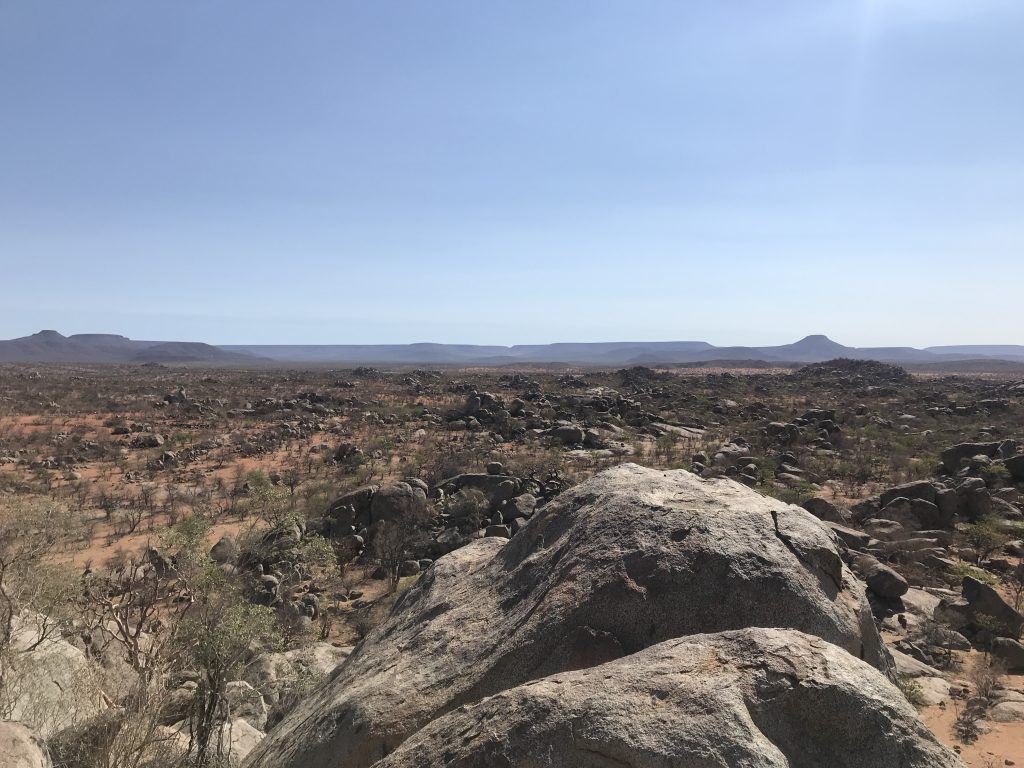 The area is super gorgeous. We stayed at Hoada camp in the area which is an eco-camp with some warm showers and a super pretty campground. The area is good for hikes and has some other fun places nearby but we mainly just stopped a day to actually spend some time walking. Etosha is fully spent in a car almost the entire day and it’s nice to stretch your legs.

If you decide to do Skeleton Coast, just prepare for a long uneventful drive. There’s some small wrecks and other things that have been rusted away but it’s not super eventful. The Cape Cross Seal colony is a sight (and a smell). But overall, it’s good for a day as you go down but I wouldn’t go out of your way for it. The gates in and out do have times you can enter but it’s overall a pretty short trip from gate to gate.

The perk of the coast is that you can restock on groceries, you can get in some hotel rooms for a break, and you can get away from the hot weather. Though you could probably do this all driving straight through Windhoek again but this gives a change of pace.

The BEST part of the place though is the calamari and fish are delicious. We had some awesome fish plates and some of best calamari I’ve ever had. We also had some great pies. Strangely, you’d think the larger city of Swakopmund would better to stay it but the food in Henties Bay was better, the place we stayed at was nicer and overall I liked the town better.

There’s lots of activities (though they’re pricey) in the area though. If you are there the first Friday of the month, you can do an Uranium Tour Mine through the museum. We couldn’t do it but it looked cool. I loved doing a quad bike tour around the sand dunes (we did a 2 hours, all the places in the area offer a similar experience for a similar price).

Pro tip: The Slowtown Coffee Roaster in Walvis Bay (and only this one) makes some amazing cheesecake. Other locations don’t serve it.

Sossusvlei is one of the hardest places to travel in Namibia. It’s super SUPER hot. Effectively if you’re in the area don’t prepare to do anything after 12pm except hanging out. The park is easy to get into and the gates open at dawn. There’s a few attractions along the way but effectively the end of the road has the biggest sand dunes and deadlvei which is a dry lake of trees that died a 1000 years ago but at preserved by sand and heat. The road is paved but the last section is a 4×4 only part which is hard to drive. We saw lots of people get stuck. I didn’t drive the section but the tip is ALWAYS have your leg on the pedal, never stop or else you’ll get stuck. So prepare to navigate around that or pay somebody at the parking lot to drive you to the next section. We saw lots of people getting out of the car and just paying someone for the last section.

This end section has deadlvei but it also has Big Daddy, one of the largest sand dunes in the world. The climb up is surprisingly easy. There’s two routes: you can either go across the salt flats and climb up the side which saves you distance but that walk across the side of a dune is REAL hard. The other route is you stay along the ridge of the sand dune all the way which takes longer but might be easier overall. I think the 1st route seems better overall though because walking on dried salt bed is WAY easier than anything else. Walking along the ridge was surprisingly easy but I would take off your shoes and pack them. You can just run down the sand dune at the end (I can’t imagine this is good for the dune… but nobody seems to be really stopping anybody).

There’s a small canyon in the area called Sessiriem canyon which has a decent amount of shade if you want to do something in the afternoon. 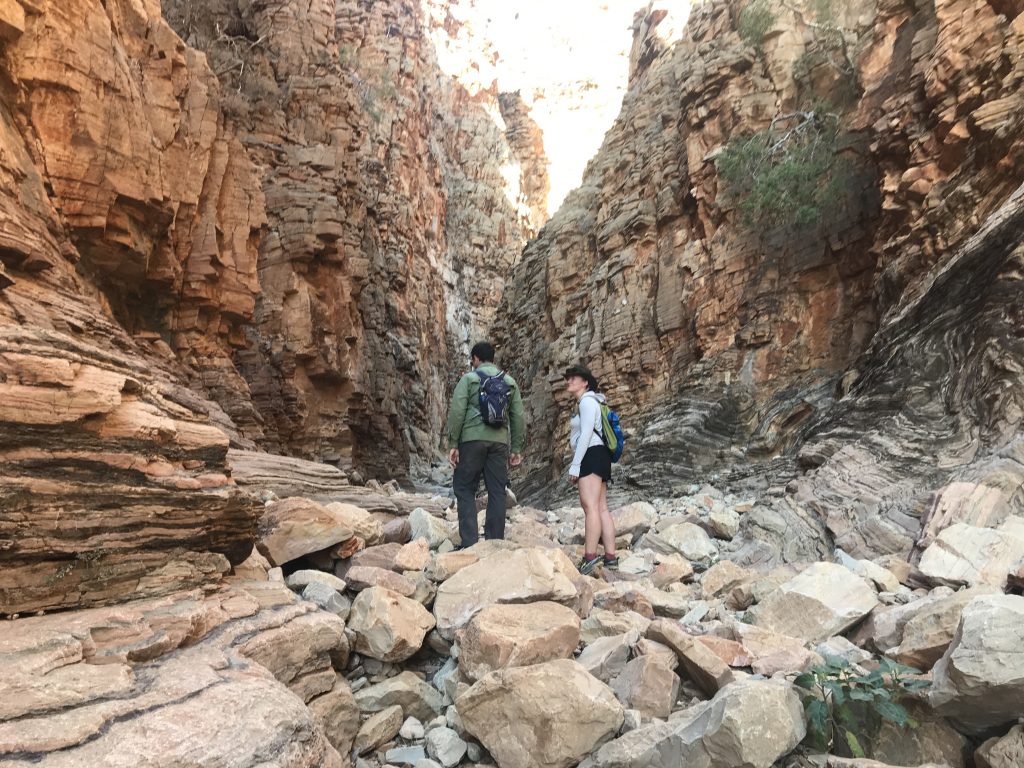 There’s another hike in the area called Naukluft which was a fun canyon hike. You go up this steep plateau and then hike down the canyon. The bar staff were hella chill and nice since not a lot of tourist come out this way.