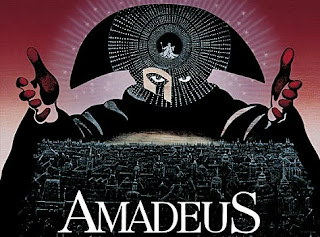 Rating: 4/5 Stars
Watch it! It was good but not the most amazing film ever.


Amadeus is a film about two composers, Wolfgang Amadeus Mozart and Antonio Salerie. The movie is basically about Salerie who has worked hard and sacrificed much to God in order to perform music, even a vow of chastity. Mozart though is the young and crazy genius, arrogant, rude but brilliant. So this of course clashes with the self-sacrificial view of Salerie.

The movie is 3 hours long and the most interesting thing about the movie that it never has boring drama,  there is always something interesting and relevant to the post going on. The characters and the clashing between Mozart’s wild life and Salerie’s quiet brooding and plotting of Mozart’s fall alternate well so you don’t really see and get a passage of time. I wasn’t really sure where 2 hours of the plot really went, it seems that it just melded well. I’m not sure if my idea is clearly expressed here but I believe the simplest way to say it is the movie is never boring and the passage of the 3 hours is easy.

Strangeness
There was one scene that I was a bit confused at, when Salerie demanded Mozart’s wife basically meet him at night in exchange for giving Mozart a role teaching the Emperor’s daughter, he sends her away. I’m not sure why he sent her away, maybe the vengeance could not be satisfied with carnal lust? I wasn’t entirely sure about that moment. I would imagine taking his wife would be a considerable revenge on him. Also, the fact that the wife NEVER ever said anything or even hinted that Salerie should not be trusted to Mozart, even without telling him explicitly about the incident I believe most people would do that.

Also if the maid looks familiar it’s because she’s from Sex and the City. Really not sure why I recognized her but I did.

Theme
The theme of the movie is kind of sad though, the mediocre regardless of how hard they work and suffer for their craft shall be outdone by the truly genius. Salerie’s works became forgotten while Mozart’s did not, perhaps as pennant for his sin or perhaps just because he never had the insight of Mozart.

There was an interesting article in a book called the “Black Swan”. In the modern age, you compete against not only against other local craft but against all the great musicians of the past whose music has been kept. What bands were forgotten or not allowed to grow because people decided to go see an accomplished band like Led Zeppelin or even Tribute Bands who only play the music of other bands. Why pay for a local composer when you can hear Mozart, Chopin, Beethoven? At the same time it’s great that we have it and we don’t need to forget greatness, it was just a cool little thing to think about it.  Maybe it helps everyone by raising the bar, maybe it doesn’t.