So me and Melissa have been watching the Lord of the Rings Trilogy so of course I decide to read the Wikipedia pages and parts of the Silmarillion again.

This is basically a somewhat long but much shorter than Wikipedia History of Middle Earth. 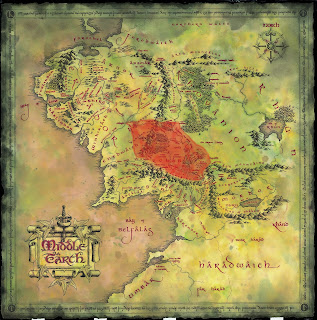 Illuvatar (God) creates Ea (the universe) and a race called the Ainur. Some of the Ainur decide to help Illuvatar help form the universe and they descend into Ea. The strongest of them became the Valar (think Olympians) and Maiar (akin to Angels). The Valar don’t really come up in the books, but we see many Maiar: Gandalf, Sauraman, Sauron, and the balrog are all Maiar.

One of the Valar, Melkor, is not happy and tries to disrupt the world, eventually he is stopped as more Valar enter Ea and fight against him. He flees and runs away and hides and the Valar go back to creating the world.

They form one giant continent that are lit by two special lamps (there is no sky / sun yet!)

They start making animals, forests, etc. But eventually Melkor comes and destroys the lamps plunging the world into Darkness. They form the earth into new lands. Aman (Heaven) and Middle Earth. The Valar decide to create a country called Valinor for their place in Aman.

Melkor then flees to Middle Earth where he becomes ruler.

During this time, Valar created their own beings (Dwarves, Ents, etc.) but Illuvatar will not let them awaken until his races awaken (Elves and Men).

Illuvatar awakens the elves and we enter “The First Age” (for reference LotR main events take place in the Third Age). They are awoken actually east of Mordor in what is referred to the map as “Rhun”.

Melkor captures elves and corrupts them forming Orcs, Trolls, and other creatures. The Valar decide to help the Elves in Middle Earth. They go to Middle Earth and capture Melkor and raze his armies. Note: his best lieutenant is not captured. That guy? SAURON. YEAH THATS RIGHT, Sauron is just a henchman of the biggest baddest evil in Middle Earth.

There is a FUCK ton of Elvish history, basically Elves are actually divided into about 6-7 houses/races) P.S. This is about the time Galadriel was born, yeah she’s that old.

Eventually, the Valar pardon Melkor. Melkor convinces an Elvis Prince Fëanor to slay his brother and take the kingdom but they are exiled.

Melkor then steals precious gems and kills Fëanor’s father. He flees to Middle Earth. So Prince Fëanor wants revenge and goes to Middle Earth in defiance of the Valar, they are then cursed to never return to Valinor until they are forgiven by Illuvatar. Galadriel and Gilgalad and other very prominent Elves are a part of this group, the House of Nordor. The reason for the curse was two fold: they defied Illuvatar by wanting revenge and to get ships they fought and killed their fellow Elves to get them.

The Elves continue fighting Melkor in Middle Earth. He has changed his name though, he is now Morgoth. But I’ll continue calling him Melkor. (Update 11/2/2011)

Soon after Men awaken. Some are corrupted by Melkor, others stay loyal to Illuvatar.

After some 500 years of war, the Valar come and finally decide to end Melkor. The great men who helped defeat Melkor are given an island called Numenor, they are also given long life and greater power than other men. (Aragorn’s ancestors!). But they are not given immortality and they are not allowed to step on Aman (unlike the Elves).

Sauron starts his rise to power in Middle Earth.

The Numeronians travel to Middle Earth, first being very nice, then eventually dominating and controlling other races of Men. Guess which races of Men fought against Gondor / Rohan during the movies?

The Rings of Power are formed:
The Nine Rings (Men) allow Sauron to dominate them and they become the Nazgul. Driven purely and completely by Sauron’s will (they aren’t alive anymore but not dead).
The Seven Rings (Dwarves) accentuate greed and desire in the Dwarves for they a race that cannot be dominated (they are the only race that can’t be dominated in any form)
The Three Rings (Elves) were made entirely separately without Saurons’ tampering but they are still connected to his will.
The One Ring his basically Sauron’s will personified into a physical object separate from his physical body, this allows him the ultimate power: Domination. There isn’t really any other major powers in the Ring, it just allows him to dominate and control others. The other powers (invisibility, long life) are just kinda side effects when other people use the ring.

The war lasts a while until Numenor sends an army and captures Sauron.

Sauron then pulls off the longest fucking con ever (lasting 150+ years) and convinces the King of Numenor to gain immortality by invading Aman (men are forbidden to enter Aman as they are mortal). Once the King steps on Aman, Numenor is sunk into the ocean and it’s people mostly wiped from the world. A small host who were loyal to Illuvatar travel to Middle Earth and form the kingdoms of Gondor and Arnor. (Arnor was a kingdom to the North East of the Shire West of Mirkwood).

Sauron’s physical body in Numenor dies but he eventually goes back to Middle Earth since his life and will are in the Ring.

The Last Alliance of Elves and Men is formed and they proceed to try to defeat Sauron. The King of both Elves and Men dies, but Isildur (prince of Gondor) defeats Sauron by cutting off his ring. This ends the Second Age.

Arwen is born during this time. The Valar know Sauron isn’t gone, so they send wizards (actually Maiar in human form, Gandalf and Saurman are sent to the West and two others are sent to the East). So thing that isn’t really mentioned in the book is that Rhun actually does have Men and Elves living there. There are at least 2 Elven Houses in the East that did not go to Valinor but don’t interact in this war.

The King of Nazgul destroys Arnor forming Agmar (thus his title, the Witch King of Angmar).
He also kills the last of the line of Kings of Gondor basically putting the House of Stewards in charge.
Sometime during this time the line of Arnor and Gondor meet up and have babies~ those babies have their babies and you get Aragorn, the legitimate heir to both Arnor and Gondor.

The White Council and an alliance of Men and Elves remove Sauron’s presence from the North and send him back to Mordor.

We then have the War of the Ring.

The Elven Kingdoms are constantly repelling invasions by Orcs / Humans (which is why they are less helpful in the movies, also that whole Two Tower things with Elves doesn’t happen in the books, they are too busy defending their own fucking countries to help Rohan).

There ya go~ I think most of it explains the history of Men / Elves / Overall history of Middle Earth in general and what exactly everything meant.

Some random stuff that might be cool to know is:
The first Dwarven Kingdom is actually Moria. It is the world’s only source of Mitrhil, eventually the Dwarves dug too deep and met the last Balrog, Durin’s Bane. After that they form smaller kingdoms in other parts of the world.

The Nine are the Nazgul
The Seven: 3 are under Sauron’s control and the other 4 are destroyed by Dragons
The Three: Gil-galad gets has Vilya (Ring of Air) and Narya (Ring of Fire). Galadriel has Nenya (Ring of Water) since these two are basically the most powerful of the Elves. Gil-Galad gives Vilya to Elrond and Narya to Cirdan, who gives it to Gandalf when he arrives in MIddle Earth. So Galadriel, Elrond, and Gandalf all have rings.

Ring-bearers (all of them) are allowed special entrance to Aman, that is why Frodo travels with Gandalf and the Elves at the end, the book also mentions that eventually Sam also takes a ship to Aman eventually but long after Frodo and the rest leave.

During the Fourth Age:
The Elves either return to Valinor or “Fade” from the world (Galadriel herself destroys Sauron’s remnants forces in the North before she goes.)
Dwarves die out
Ents die out (they eventually become the trees they protect)

Eventually Middle Earth is supposed to become our world? Like regular history, but that’s kinda a stretch…
The Shire and the Northern Kingdoms are supposed to be England, the Mirkwood and other territories become Europe. etc. etc. But that’s not really super supported by Tolkien.

Questions Asked:
1) how do they defeat melkor: like, is he banished somewhere again or is he completely decimated never to return again?

They basically defeat him in combat. The first time he is chained up, the second time he is sent into the Void where he will rest until Ragnarok (called Dagor Dagorath in the Tolkien history)
2) Where is Numenor? Is it like…in middle earth somewhere, like west of the shire or south of gondor or something?
Numenor is island nation near Aman not attached to Middle Earth. So West of Middle Earth.
3) so.. the Numeronians were the ones with the Oliphant that fought against the men of Gondor/Rohan?…I thought those were desert people..
By the third age the Numeronians are dwindling. Aragorn is a descendant of Numenor, the Oliuiphant are people of East and South who hated the Numeroneans.
4) Who made the 3 Elf rings if Sauron didn’t?
The Elves were also master smiths in their own regard, I forgot the Elf who forged them.
5) If the Valar are forbidden to enter Aman throuout the end of the second age…then how can they send the Maiar wizards, who are theoretically in Aman, to Middle Earth in the beginning of the Third Age..?
Valar are not forbidden to enter Aman, the Elves of Noldor (Galadriel and her people) are not and Numeroneans (Mortal Men) are not allowed. Valar are allowed.
6) What is “The White Council”?
White Council is the Wizards, the Head of the Elven Kingdoms, and the Head of certain Human Kingdoms (like Gondor).
7) If Gil-galad gives away his special rings, where is he at the time of the War of the Ring? Returned to Valinor?
Gil-galad gives his rings away because they cannot use their rings as they would be dominated by Sauron if they did. He fights in the War of the Ring and dies in the final battle with Sauron.

8) also, what exactly separates the Valinor from the Maiar?

Just a difference of power. Just as most series have classes of demons and angels, there are classes of Gods in Middle Earth. Valar are more powerful, Maiar are less powerful.