(P.S. As usual, please correct me if I make any stupid grammatical mistakes or if something didn’t make sense). I’m using blogging as a way to improve my writing and communications skills.

Facebook has had lists for a while now. Facebook lists are a way to sort your friends into groups for restricted posting. Post only to people in the bay area, etc. But you had to do a lot of maintenance, meh!

Smart Lists are a set of new lists created by Facebook, some are automatically generated for you based on Education, Work, and Location. So for me, I have a smart list for my High School (Yucca Valley High), College (UC Berkeley), and Work (Xythos, Twistage, Yelp, and inDinero).

The two lists that they haven’t built automatically for you but have you to fill out are “Close Friends” and “Acquaintances”. Close Friends appear on your feed more, Acquaintances less. Great feature! I like it!

The last list “Restricted” is for people you don’t want seeing your status and non-public information. In my case, I use it for Family who I’m friends with so they can Facebook Chat with but don’t really want to share everything with.

This entire Smart List thing though is to play catch up to Google+ who has circles. Circles are similar to lists but provide a more visual way to organize your friends into groups. Facebook easily one ups Google+ by building MOST of the lists you care about, now all they have to do is make it so you can visually build custom lists similar to Google+ instead of going through a giant list of your friends.

A cool thing I learned though that is if you want, you can turn off certain types of notifications for each of these lists now. So you can see you can turn off Games or just see their status updates / photos and videos! 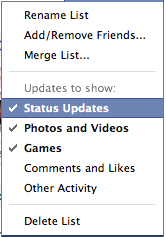 You can do this for individual people now as well. You can have it so either all updates, most updates, or just super important ones appear to you using the Subscription Button. You are automatically subscribed to your friends. 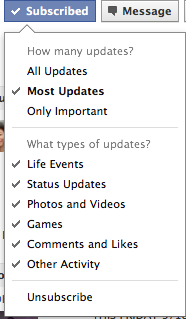 Subscriptions
So with Facebook, normally you have a two way relationship. To be “Friends”, both people must approve the connection. But subscriptions allow for one way friendships, allowing you to subscribe to people’s updates (but only their public ones). It’s wannabe Twitter.
Honestly, this doesn’t matter to the regular users that much. It’s just another mechanism to follow people you want to hear from but really don’t want to be friend with (Ex. Mark Zuckerberg seems to be subscribed to a lot right now).
For those of you concerned about stalkers subscribing to you. Go to Account -> Privacy Settings and set the default sharing preferences to friends only.
What’s Left?
The only other features that Google+ & Twitter have that Facebook doesn’t is:
Visually creating lists
Mute Button on Posts
Hash Tags
Anything else I’m missing?

Stuff that only tech people probably only care about

I’m not sure what the point of Subscribe is actually? The only thing I can think of is an engineering decision to make Profiles the same as “Facebook Pages” though Facebook pages have their own unique purposes for brands including providing a set of links, information, and other things that profiles don’t really have on the site.

Has information about their CDs, questions they asked, discussions, and other information (other band pages have tour information, music offers, etc).

I think it’s for the in between super famous and the non-important people so they can post things without having to maintain a separate page.

Marco has a Facebook page but it only has 26 likes, probably not worth updating, especially since he has 25,000 followers on Twitter. Perhaps this is a way for Facebook to basically make yourself more encouraged to post publicly for people who MIGHT actually want to?